by Mike M
in Toying Around
5 min read

“Toying Around” is a weekly feature which focuses on some of the more random sides of toy collecting. Mostly, these articles will focus on toy premiums like cereal box toys, fast food kid’s meal toys, gumball machine toys and the like. Enjoy, play hard, but play nice.

Very much considered to be toys by many collectors, flicker rings like these were available in a variety of forms, but today we will focus on the metal backed “v-base” Batman rings. There were also plastic bases used later in the the Vari-Vue company’s later years before they went out of business in 1989.

As a matter of fact, upon going out of business, the company liquidated old stock and some previously unused versions of ring backs (the big blue plastic picture frame types) were later used with uncut sheets of “flicks” glued on and sold as authentic. These should be considered fakes or at least non-released versions.

Often, the flick images for these were cut by the seller from uncut sheets and an easy way to tell a fake is by the corners; they need to be cut with rounded corners that are identical. If they look uneven, they are more than likely fakes. 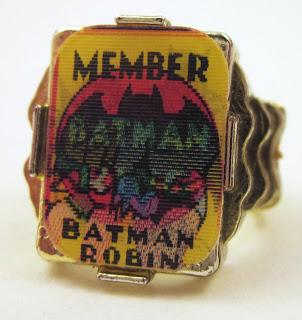 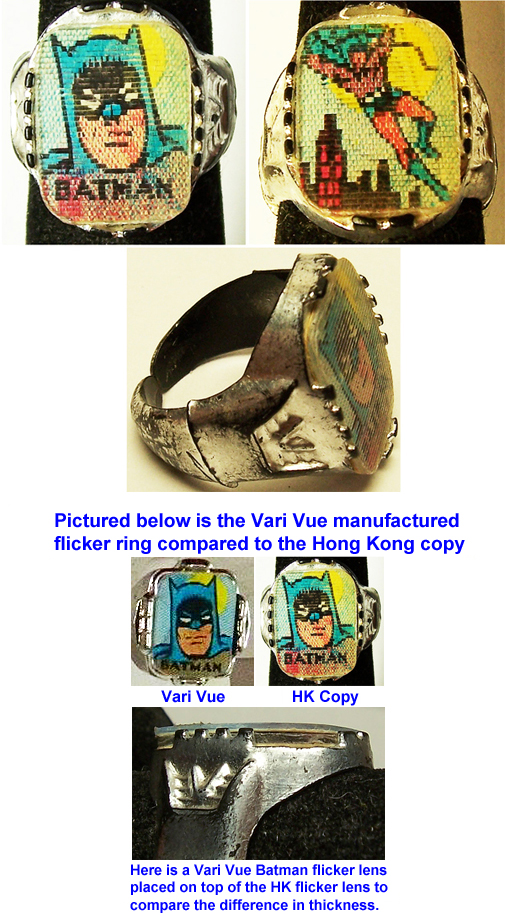 [Side view of the V-Base Ring]

These rings were available in a variety of places. Gumball vending machines, inside food packaging like Cracker Jack and as counter displays sold in stores like five-and-dime/general stores originally in the 1960’s (beginning in 1966). 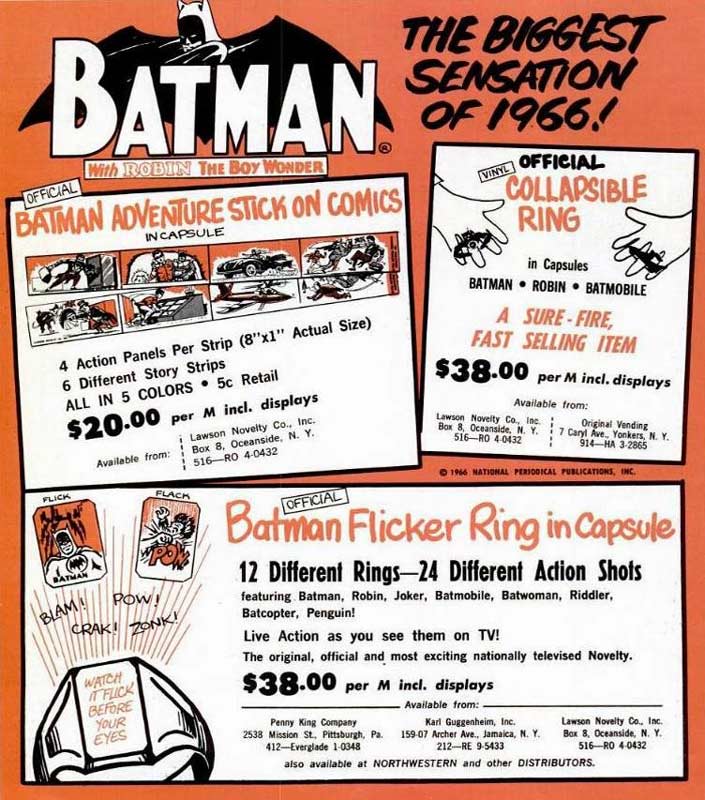 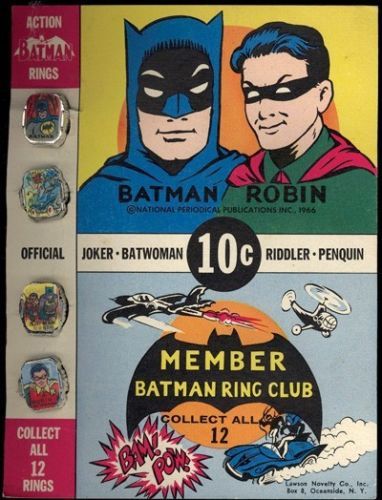 Other side designs show up on the metal rings later, as well, such as a ridge design and a wavy ridge design. The V-Base design was later knocked off in Hong Kong. The only way to really tell the difference between the authentic rings and the knock-offs are that the Hong Kong knock-offs are about double the thickness of the originals. 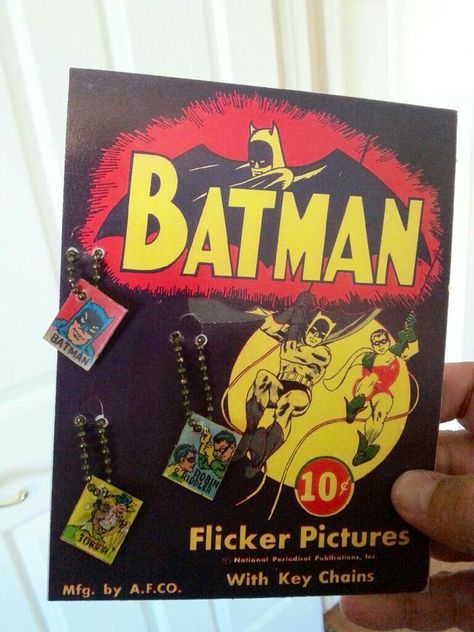 [Use of the Batman flick images on keychains – Gumball machine display] 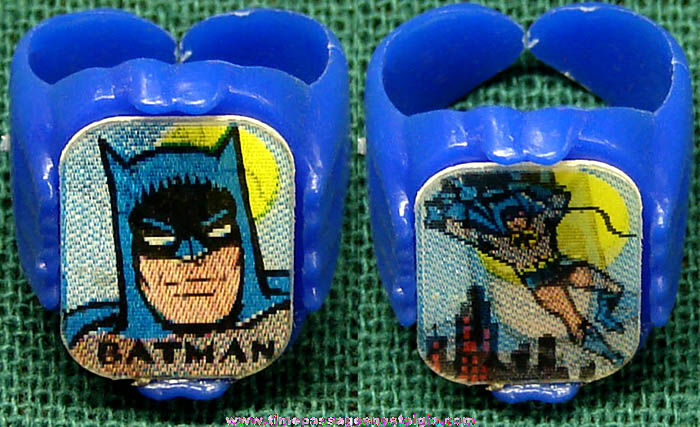 [Much later plastic version of the rings – There were multiple types]

The images themselves have two superimposed images cut out from a printed sheet with a plastic “lense” placed over the top which was ridged such that when looked at from different directions, the two images would “flick” back and forth. Later known as lenticulars, this “technology” was and has been popularly used on trading cards, comic book covers and other collectibles up into the present day. 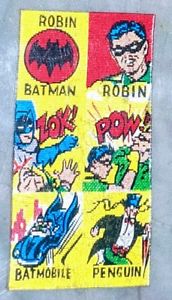 There were many different themes of these such as the Beatles, The Monkeys, 007, Captain Action, Popeye, Looney Toons, Green Hornet and many, many others which many people collect, but for modern collectors whose interests span the nerdy things we talk about here on toyinformer.com, the Batman rings seem to be the most sought after.

There were 12 Batman rings in total. Here is a quick breakdown (in no particular order): 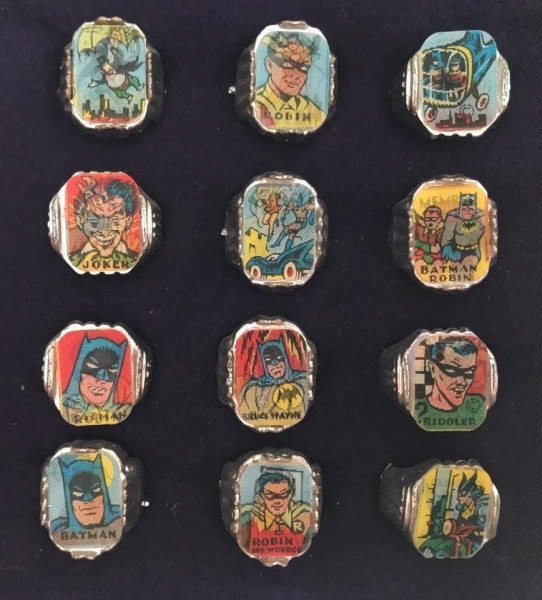 [Above is a nice clear picture of all 12 rings]

Well, that about does it for yet another Toying Around. I hope you enjoyed this little stroll down memory lane. These rings are fairly inexpensive on the aftermarket and sell for between $15 and $30 depending on condition and how early the version is.

Obviously, the metal V-Base versions are the most sought after with the other metal base versions coming in next in value and the plastic, later, versions being the cheapest. Sets sometimes sell for a premium, especially if they are the original versions.  Until next time, be well, thanks for reading, play hard, but play nice.