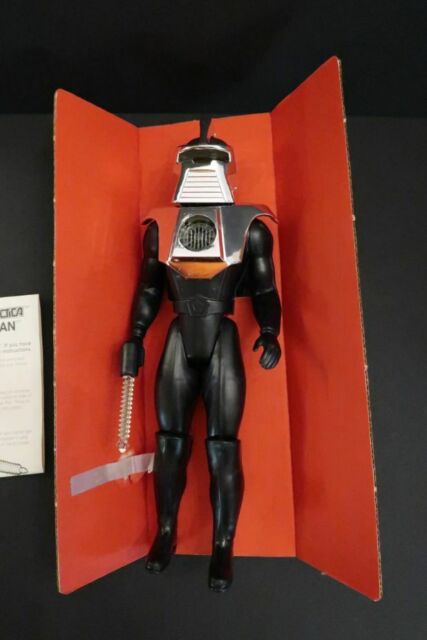 Welcome back to another Mike’s Closet, boys and girls. I hope you all enjoyed last week’s glimpse at my ultra-nerdy home-made lightsaber hilts. This week, we’ll go back to a traditional look at what’s in the closet with a look at a toy line that gets very little attention; Vintage Battlestar Galactica. Falling just outside the realm of the “Highly” collectable stuff from the 1970’s/1980’s (like G.I. Joe, Transformers and Star Wars), BSG toys and the television show were an integral part of my childhood. Essentially, it was live action Star Wars on TV. Much of the special effects and design teams were folks who worked on Star Wars and while it didn’t quite have the impact that Star Wars did, it was still an incredible show for its time, especially on a television budget.

Much like the show, the Mattel toys had some influence, as well. Specifically, the early versions of the Cylon Raider and Colonial Viper toys with the little red firing missiles are of importance in that in 1978, a child choked to death on one after aiming a Viper into his mouth and firing it. As one might expect, a lawsuit ensued and this frightened rival Kenner Toys such that the Boba Fett figure that was slated for release in the Star Wars line was altered as a result. In short, the “rocket firing” Boba Fett that was supposed to be released that year (1979) was instead sent out with a non-firing rocket as a result of BSG toys and their lawsuit. 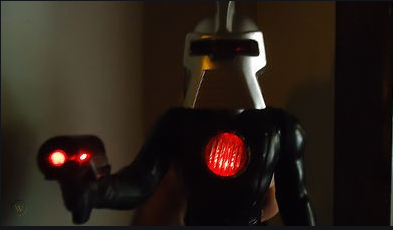 [Cylon lit up in the dark]

But I digress. The overall line consisted of 6 vehicles and ten figures (some of which are exceedingly rare) and two 12” action figures (along with role play, board games and a few other products). I will go into the 3 ¾” line in a different article, but today, I want to focus on a particular toy which is the 12” Cylon Centurian. 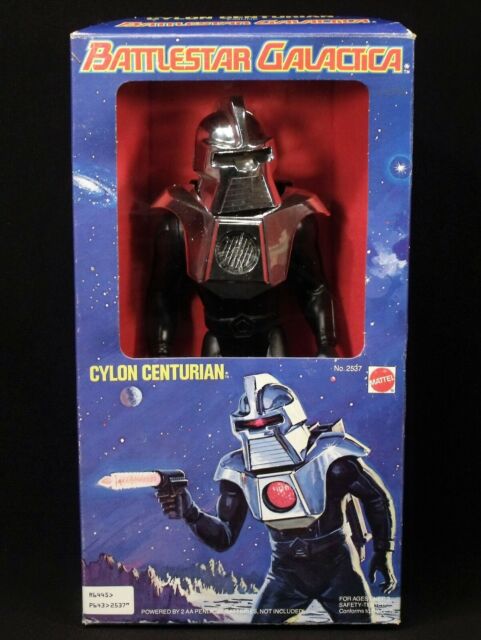 This figure is particularly cool and had some awesome play value. With batteries in the backpack, one could press a button and the laser gun would light up, the scanner eye would light and the chest “pulsator” would light and sound. Additionally, with a lever on the back of the head, one could move the eye scanner light from side to side just like in the show.  Also, the plastic on the helmet and backpack/chestplate was chromed up (much in the same manner as C-3PO) and just looks awesome. The body is black plastic. It was boxed up in a trapezoidal window box, attached to a red cardboard insert and with an instruction sheet. On the aftermarket, if complete, working and in the box in good shape, it will fetch $150-$200. Loose and working (and complete) it shouldn’t top $50. That said, the chestplate is almost always missing and the gun tip is most often broken off as it is quite fragile. 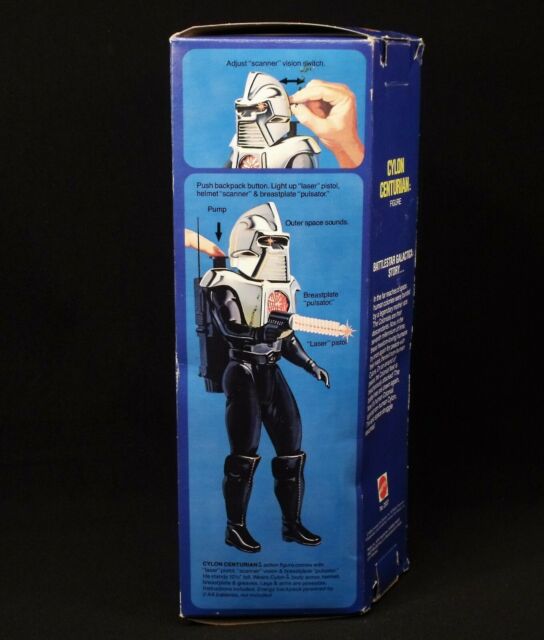 For yet another week, I hope you’ve enjoyed this little look into my collection. Next week, we’ll chat about something completely different. Eventually, as I said, I will also delve deeper into this vintage Battlestar Galactica toy line. Until then, be well, thanks for reading, play hard, but play nice.