Up today for another new glimpse into my closet are some of my favorite toys of all time: Star Wars vintage roleplay blasters. I’ve written about these before in passing, but I’ve never done a feature on them. I have a particularly large place in my heart for these as one of my fondest memories of owning one is especially personal.

Star Wars is quite a bit more important to me than just a nerdy hobby. Somehow, throughout my life (especially my younger life), major life milestones have been marked by a simultaneous Star Wars memory, event or milestone. In short, my fondest memories of childhood along with my relationships with many of the best people in my life are intrinsically linked to Star Wars and the experiences I’ve had with the franchise. For instance, my brother’s and my closeness has quite a bit to do with our bond over Star Wars and, as such, I am eternally grateful to Lucas’ Galaxy far, far away. … but I digress. Let’s get back to the blasters.

In early 1984, when I had just turned seven, Return of the Jedi was all I could talk about. To this day, it is my favorite Star Wars film. Bash me all you like and add to the din that chants, “Empire is the best one,” but for my money, ROTJ has everything Empire has and more. Oh, and did I mention that I love Ewoks? I think that anyone who was between five and nine years old in 1983 loves Ewoks and many of them agree with me on Return of the Jedi being the best film. Thus, the math seems to look like this:

Anyhow, for my seventh birthday that January of 1984, my Grandfather (whom I adored and am now very much like in my adult years) gifted me the Han Solo Blaster roleplay toy. I had also just gotten out of the hospital having gotten my tonsils out, so it was a dual-purpose gift and I absolutely loved it. I had it with me at almost all times. Regrettably, that would be the last day I’d ever see my Grandfather as he went into the hospital the next day and passed away shortly thereafter. I was too young to visit him during his illness and can still remember when my Father told me he had passed away. I was shorter than the level of the kitchen counter. Even though, like so many of us, I sadly sold off the majority of my vintage Star Wars toys at a family tag sale many years later, I did keep that blaster and still have it to this day. It hangs proudly on my wall along with all of its associated memories of my Grandfather whom I loved very much; we were buddies.

Okay, fast forward to the days of having expendable income when many of us were able to finally reconstruct our childhoods. Now, I can go back and snag some of the toys I had along with many of those that I couldn’t convince my parents to buy for me, back then. At the top of the list are the remainder of the vintage roleplay blasters. Following is a breakdown of the four blaster toys offered during the vintage Kenner years. All of them are cool in their own unique way, but that Han blaster will always be my favorite. 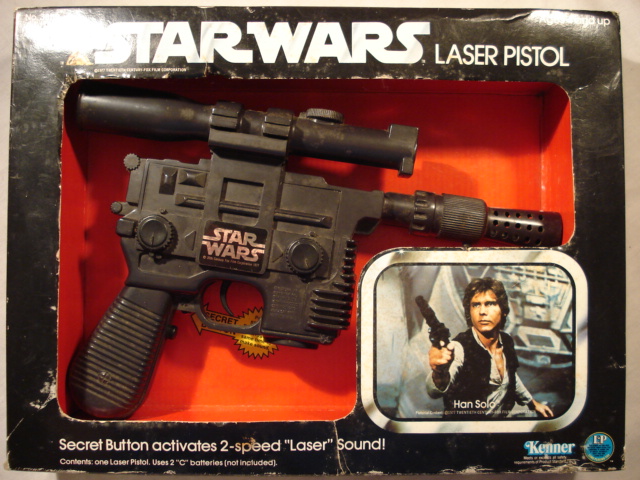 Clearly the BlasTech DL-44 that Han uses throughout the trilogy (based on a Mauser pistol). It was initially marketed for Han until the Empire Strikes Back re-marketing of the toy where they produced it in two boxes; one for Han and one for Luke since he also uses this type of blaster from time to time throughout the first two films. The toy was also re-marketed again for Return of the Jedi with a different Luke picture.

The gun remained largely the same for all three releases other than a change of the sticker on the sides that sported the newest logo. Additionally, the trigger and button changed from black to orange for ROTJ and the two thumbscrews that held the battery compartment closed changed from black to grey. It is a fairly inexpensive toy ($50-$75 loose and working) and generally do not break easily. Most aftermarket versions I’ve found still function. In packaging, one can expect to pay about $300-$400.

There was a prototype which was never produced that was a water pistol version of Han’s blaster and based on the same mold as the electronic one. 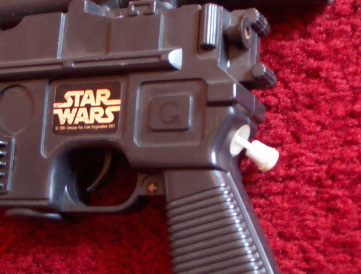 This is the Stormtrooper-style BlasTech E-11 blaster rifle which was based on a Sterling submachine gun. These were used by some of the movie’s heroes, as well (like Luke, Han and Leia), and the marketing on the box oddly shows Luke rather than a Stormtrooper. Either way, this toy is highly sought after, especially still functional and with the hinged butt still attached and unbroken. As a result, it is a rather expensive toy and even more so if it is in the package. It was re-marketed in Empire Strikes Back packaging and then again as “Electronic Laser Rifle” in Return of the Jedi packaging. In boxes, these are rather pricey (usually around $400-$500) although loose, they shouldn’t run much more than $100 with an unbroken butt. 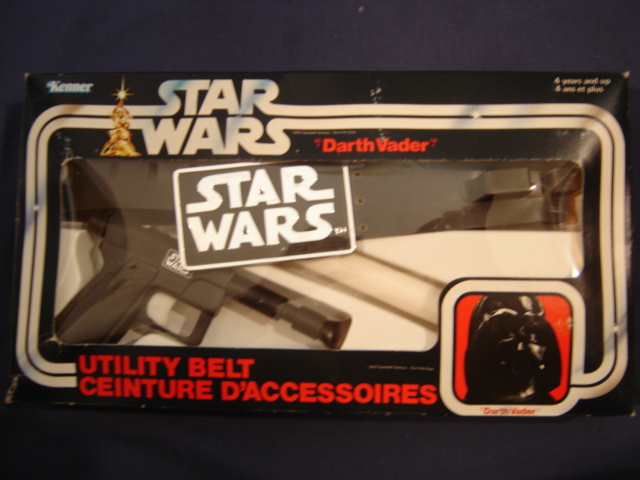 Three Utility Belt sets were produced for Kenner Canada and are exceedingly rare. There were three sets (Luke, Leia and Vader) that were all largely identical other than an extra flashlight accessory in the leia set and a grappling hook in the Luke set. The Vader set is pictured, above, but all, but each set contained the same generic blaster which very much resembles Leia’s DDC Defender blaster. I have never seen one of these in person, but I’d sure love to own one, especially with the box. I have no idea what the price would be on one should it ever come up for sale, but I’d venture to guess it would be in the multiple hundreds or, perhaps, upwards of $1000. I honestly have no idea. 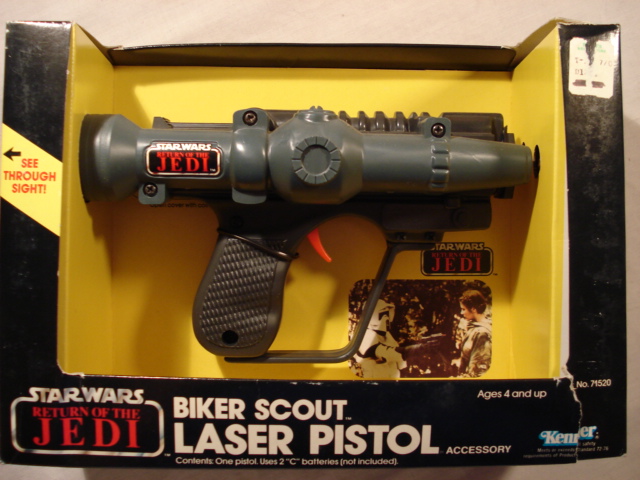 Based on the Biker Scout pistols which were a fabricated prop for the films (i.e., not based on an existing gun), this is a fairly decent replica with sounds and a see-through sight. A rather rare toy, but not highly sought after. As such, it is not terribly pricey on the aftermarket. Loose and working versions should be around $50. In a box, expect to pay more like $150-$200. 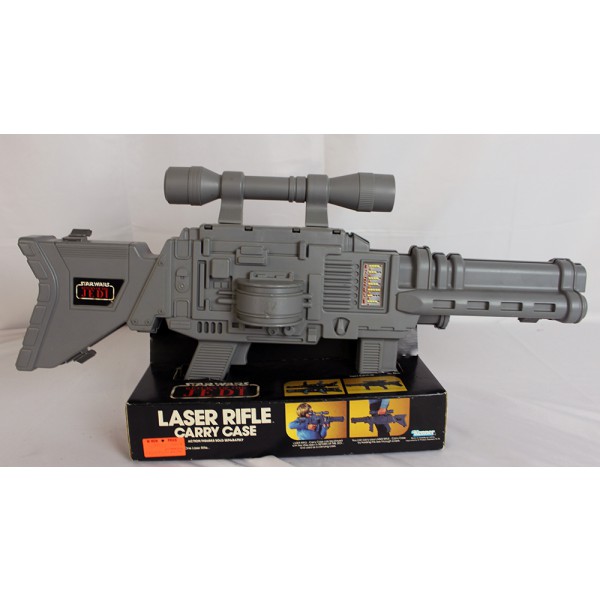 Meant as a dual purpose toy, this rifle was not only a carrying case for your favorite figures, but was also meant to pull duty as a roleplay toy. It did not have any electronic functionality, but it was a hefty size and a decent (albeit “chunky”) replica of the Rebel Endor/Rebel Hoth rifles which were based on M-16 and/or AR-15 rifles. Much like the Biker Scout Pistol, loose versions shouldn’t top $50 and packaged one can expect to pay between $150-$200.

And there we have it for yet another Mike’s Closet. I hope you enjoyed this glimpse into my collection and weren’t too bored by my personal stories, today. Until next week, be well, thanks for reading, play hard, but play nice.