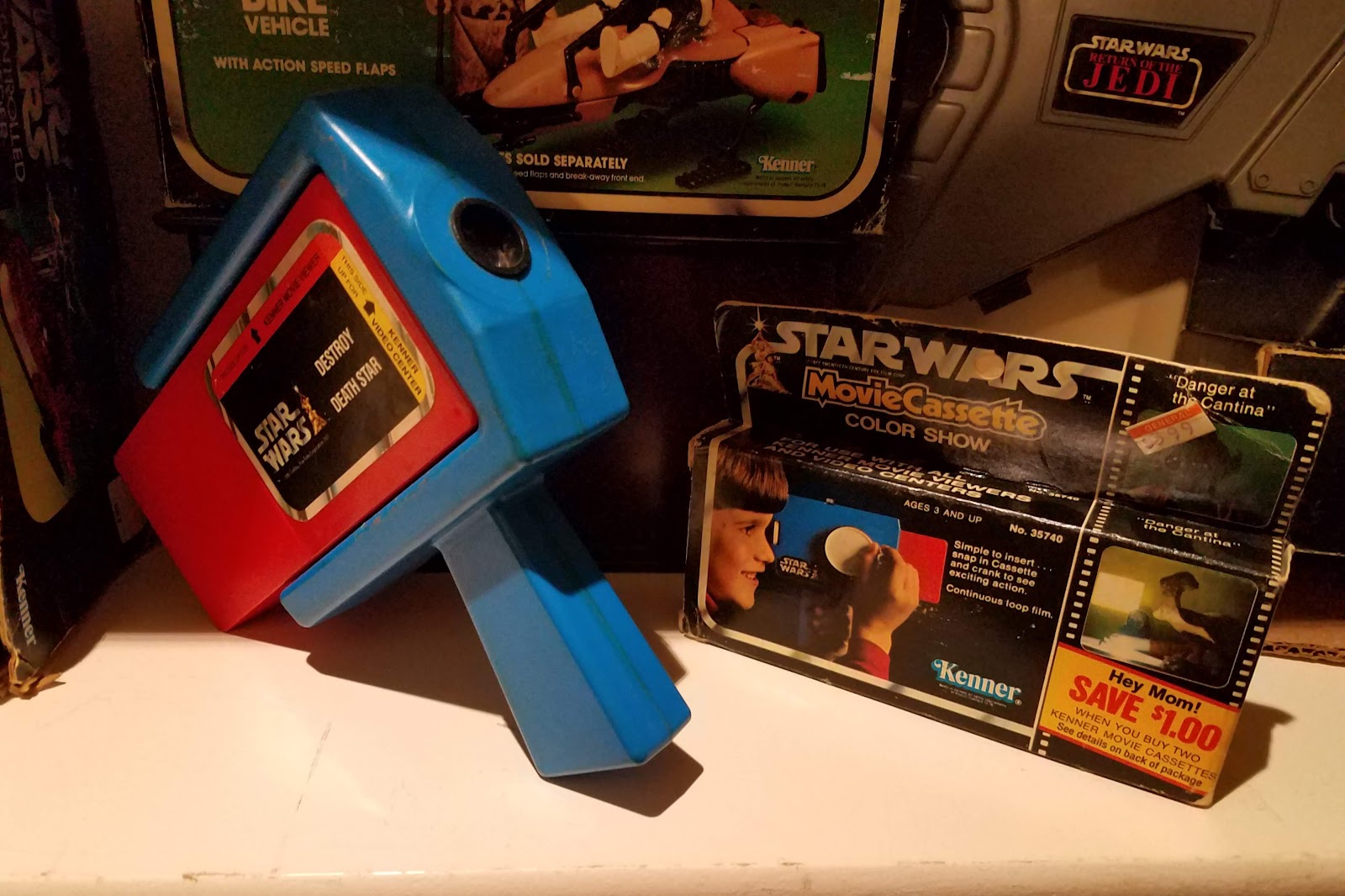 Recall a time before Youtube and before streaming media and before blu ray; times when a VHS tape cost upwards of $100 when it was initially released and a time when floppy disks were actually floppy and could perhaps store only enough information for a word document or two. Put yourself in the shoes of a 7-year-old kid who’s mind had just been blown by Star Wars and who would have gone back to the cinema to see it every day if Mom let them and if money were no object.

In 1977/1978, the only way a kid could have a portion of the Star Wars film in their home was to own the Super-8 reel which was only about 5 minutes of footage. It had sound (if you had a projector that played sound). Or you could have one of my favorite toy items of all time.

It gets overshadowed by the action figure-related toys, but Kenner released a series of cassette cartridge film clips and a manual movie viewer with which to watch them. With a little “window” at the top to allow light in and with the correct speed on the hand crank, one could watch climactic scenes from “A New Hope” over and over (or in slow-motion or even backwards).

The red plastic cartridges themselves had a white spindle that would catch the crank mechanism and by looking into the lense, one could marvel at the magic of “moving pictures.” There was even a little focusing wheel to keep the picture clearer.

I’ll never forget the click-click-click of the plastic sprocket inside. It was pretty much a 60-second continuous Viewmaster using 8mm film and it was genius.

[Movie Viewer in box, front and back]

The viewer and cartridge system was actually developed by Kenner for other properties before it was used for Star Wars. There was, at first, a green version with a yellow crank and 12 boxed cassettes branded (with a sticker on the viewer) for Snoopy in 1975. There was also a 13th cartridge that came with the viewer. This version, oddly, was used for the foriegn issues of the Star Wars viewer even though the blue/white Six Million Dollar Man version was used for the U.S. release (see below for more information on that). 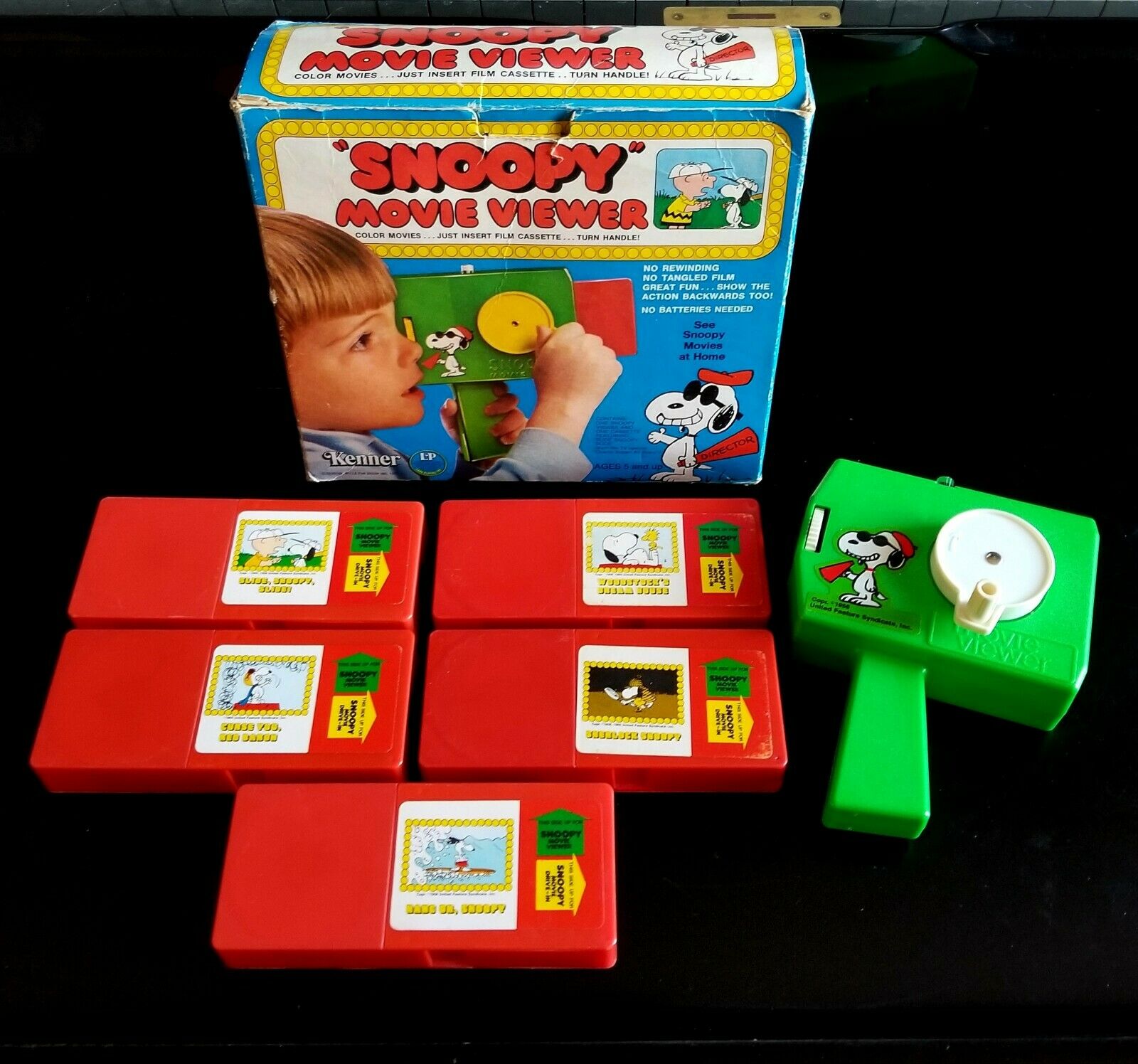 Additionally, Kenner released 6 other stand-alone cartridges with no branded viewers. They were as follows:

After the Star Wars version came out, Kenner reused the product one last time for Alien in 1979. The viewer itself was greyish-black with a white crank and there was only the one cartridge that came with the viewer which was called Alien Terror. 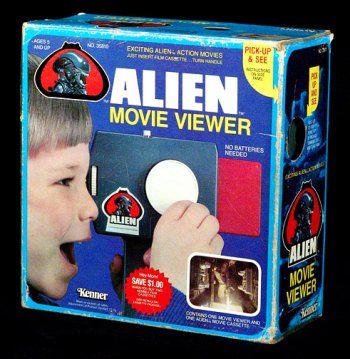 [Final usage of the Movie Viewer for Alien]

The film stock for these cartridges has often aged to the point where the acetate has oxidized and the film becomes pink-ish in hue. This is common. Additionally, the mechanism involved in pulling the film through the cartridge often scratches the film stock. Thus, relatively unfaded/undamaged cassettes are quite sought after and carry an aftermarket premium. 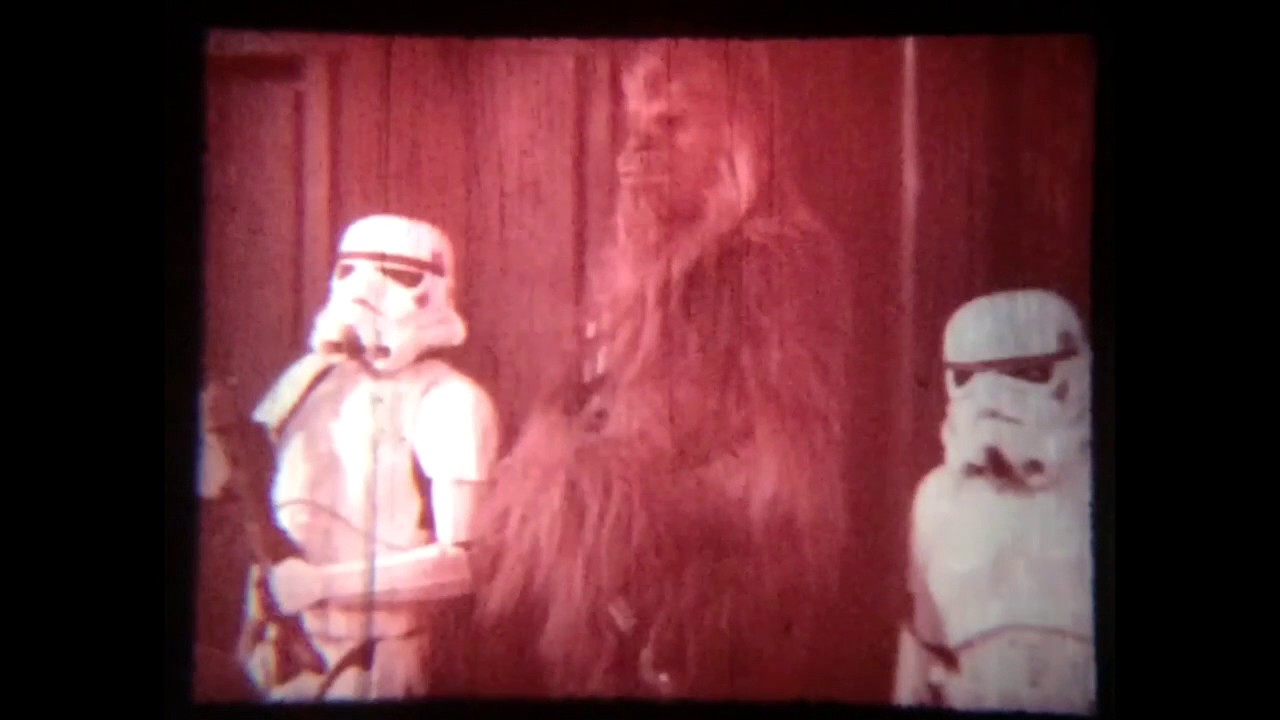 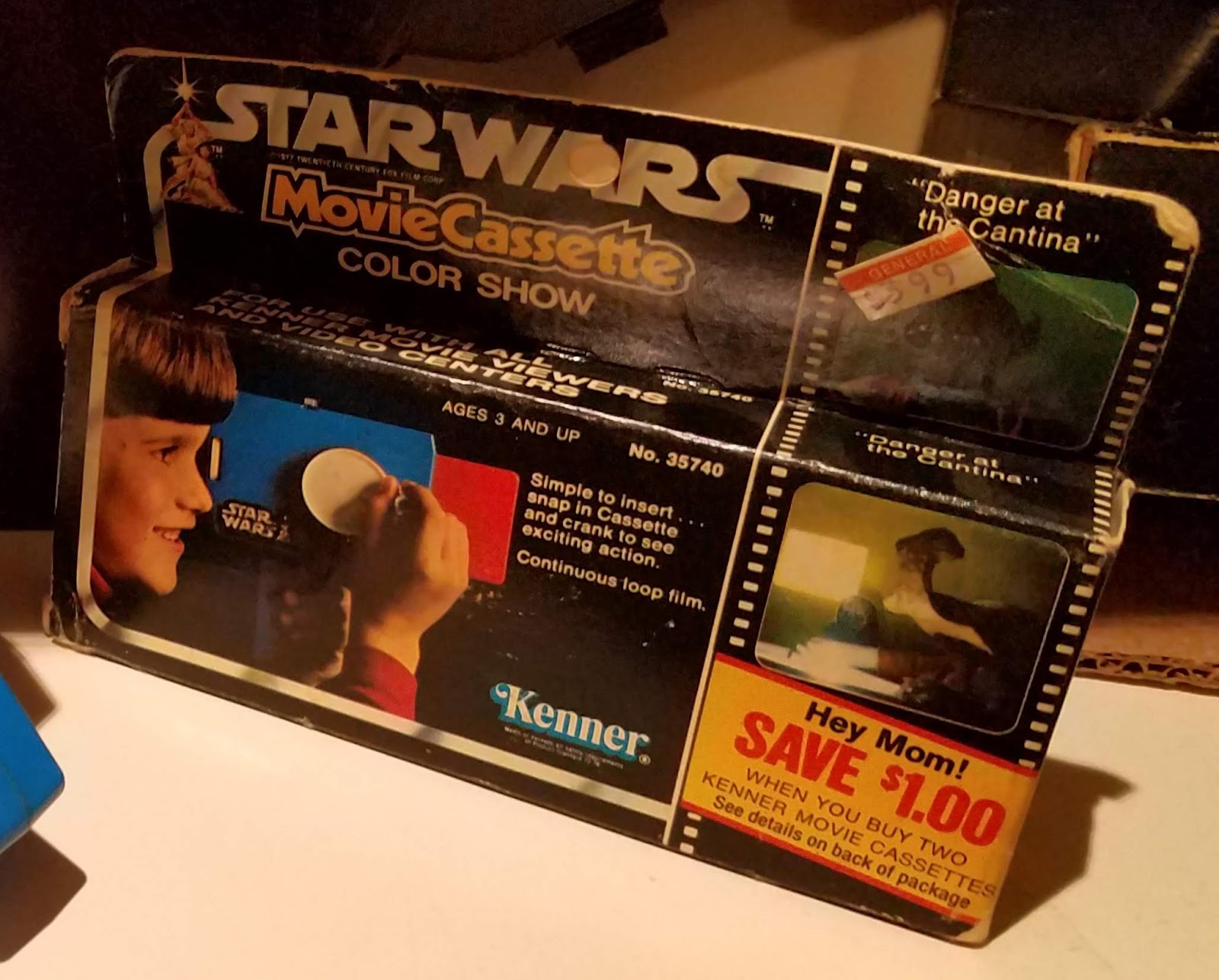 [Danger at the Cantina Cartridge in Box – Front] 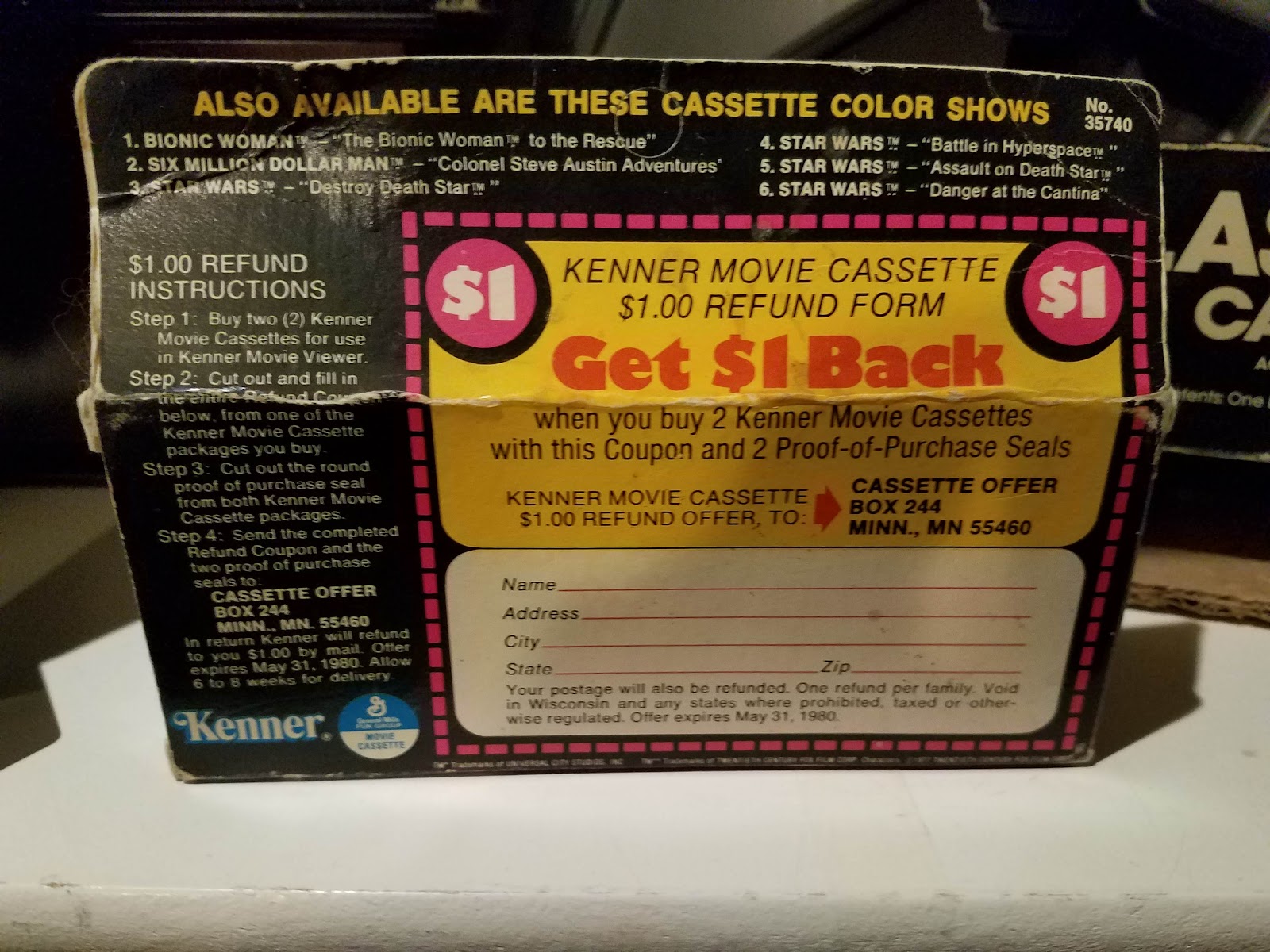 [Danger at the Cantina Cartridge in Box – Back]

And there we have it for yet another week, kids. A toy from a bygone era that is still an awful lot of fun to collect and use. Examples of the viewer should cost about $10-$15 loose and with no cartridge. Each loose cartridge should also cost about $10, although the Cantina and Hyperspace cassettes are a little rarer and might cost a little more. Boxed examples are rarer (of course) and a boxed viewer will run $50-$100 while boxed cartridges run around $25-$30, each. Happy hunting and until next time, play hard, but play nice.