Catch A Wave: Visionaries: Knights of the Magical Light

by Peter R
in Catch A Wave
12 min read

Welcome to this edition of Catch A Wave: Visionaries: Knights of the Magical Light.

Back in 1987 Hasbro produced a set of figures in conjunction with the cartoon series ended. The figures had hologram stickers on both their chests and their accompanying staffs, making them an expensive to produce toy for the time.

Unfortunately, the show was not renewed after the initial 13 episodes, so the toy line only lasted one year. A second wave of characters was planned for release in 1988; but were never released due to the cartoon and the toy line’s cancellation.

I for one was very disappointed as this was one of my favorite toy lines growing up. I had the full line which consisted of eight individual knights produced along with four vehicles that were each packaged with an exclusive figure.

There was also a short-lived comic series that featured the Visionaries as well. Published bimonthly by Star Comics that lasted six issues from November 1987 to September 1988. I highlighted the last couple issues over at comicbookinvest.com in my weekly Dollar Bin Digging article this week. Low print runs on late run issues always command a premium as completionists look to fill out their sets.

That said, let’s take a quick look at the commercial from back in the 80’s and then we’ll dive right in. 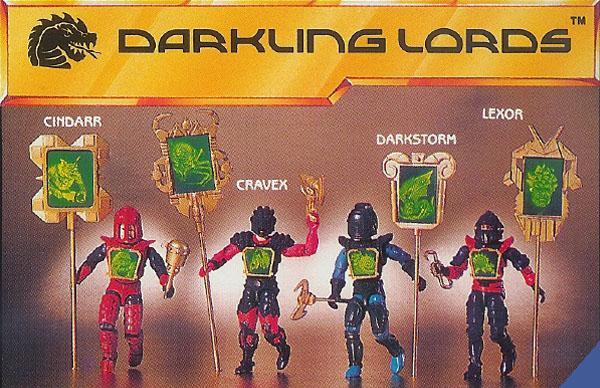 These were the villains. The bad guys if you will which are usually the more interesting figure/armor designs. Following each name are the details from the back of their file card. Just like G.I. Joe’s, they had a card that told you a bit about the figure you just bought that you could cut out and keep. 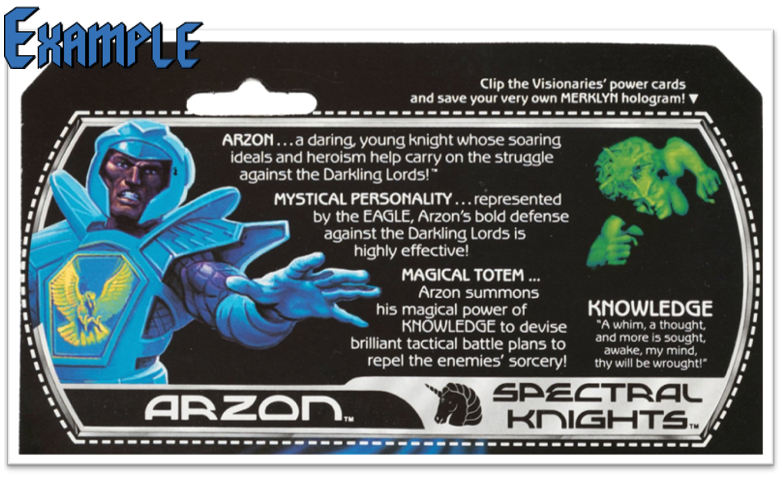 Cindarr… he’s a colossus of obliteration, smashing through any and all Spectral Knights’ blockades!

Magical Totem… Cindarr calls upon his power of DESTRUCTION to cause earthquakes, which split the earth and swallow up enemy strongholds!

Power of Destruction… “By nature’s hand, by crafts, by art, what once was one, now fly apart!” 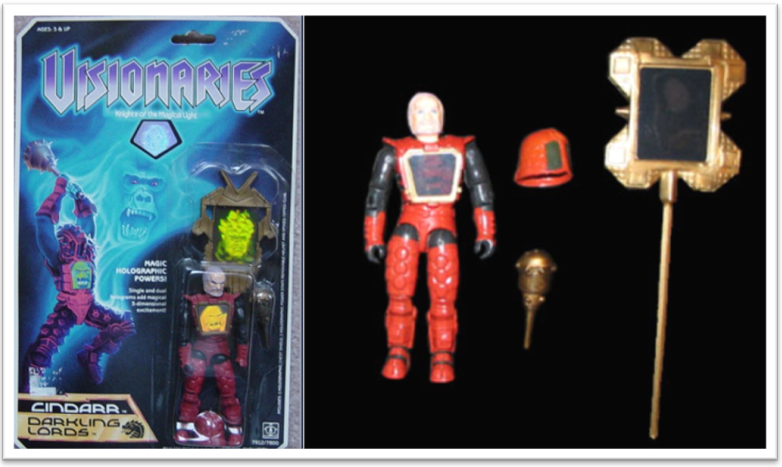 Cravex… a hottest-tempered, irrational lord of evil ready to chop through anyone who crosses him!

Mystical Personality… represented by the PHYLOT, an ominous winged beast who scavenges the remains of defeated opponents after battle!

Magical Totem… he uses his power of FEAR to freeze the hearts of the Spectral Knights with bone-chilling terror! 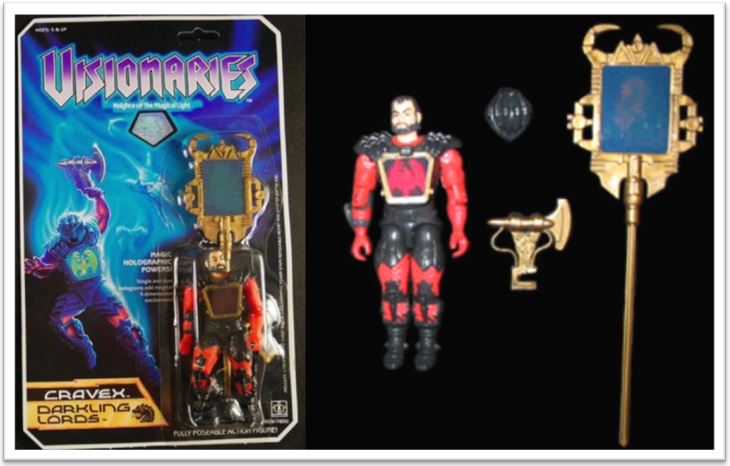 Darkstorm… this diabolical, corrupt lord of evil is committed to imprisoning the magic of the Spectral Knights’ for all eternity!

Mystical Personality… a SWAMP MOLLUSK, depicting his slimy insensitivity toward all that is good!

Magical Totem… During battle, Darkstorm summons his magical power of DECAY to corrode and eat away at Spectral Knight armor!

Power of Decay… “By what creeps, what crawls, by what does not, let all that grows recede and rot!” 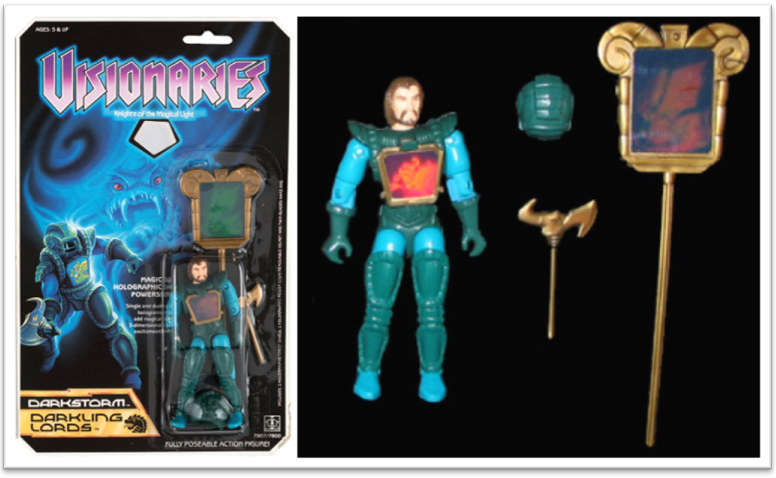 Lexor… a foe of good, he prides himself on his talent to create havoc – wreaking terror wherever he goes!

Magical Totem… Lexor summons his power of INVULNERABILITY to keep him unscarred during hand-to-hand combat with the Spectral Knights.

Power of Invulnerability… “The arrows turn, the swords rebel, may nothing pierce this mortal shell!” 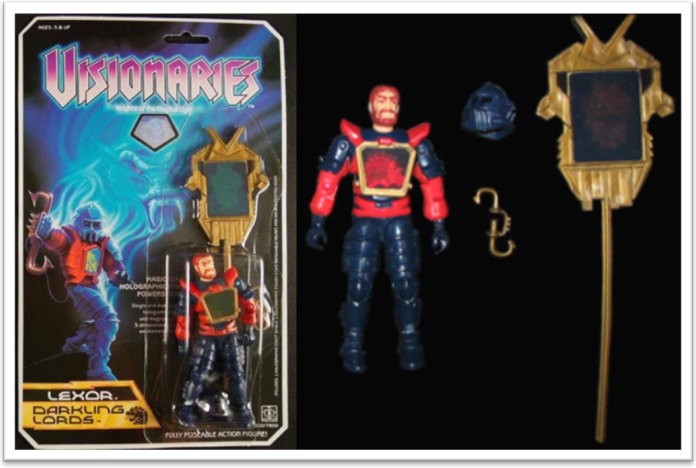 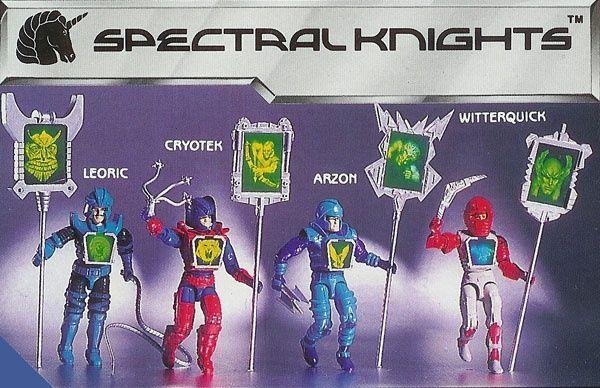 Our heroes headed by their leader Leoric; the Spectral Knights are magic users who use magic for good. These guys always reminded me of The Greek Gods of myth with their powers, etc. The rest of the back of the card that wasn’t the file card or the figure line up was just a general rundown on the toy line including what looks like the layout of a potential Castle Grayskull type base that was never made. 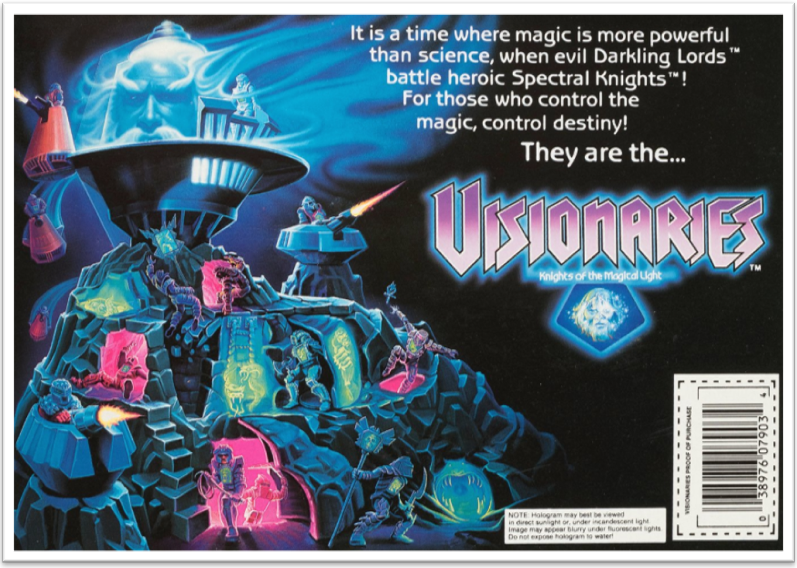 Arzon… a daring, young knight whose soaring ideals and heroism help carry on the struggle against the darkling Lords!

Mystical Personality… represented by the EAGLE, Arzon’s bold defense against the Darkling Lords is highly effective!

Power of Knowledge: “A whim, a thought, and more is sought; awake my mind, thy will be wrought!” 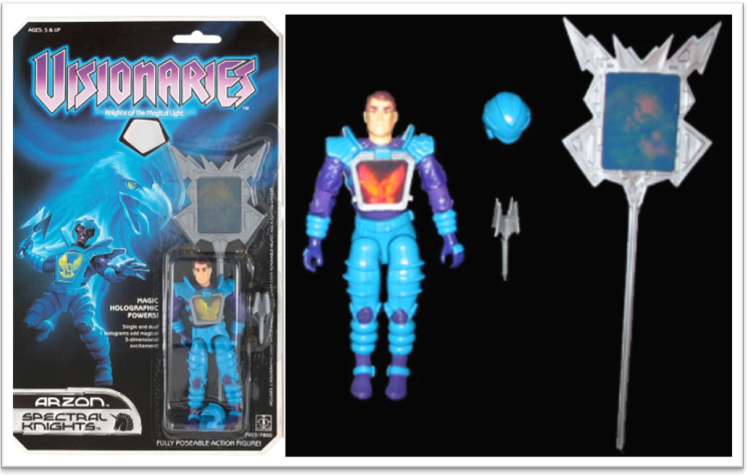 Cryotek… a self-sacrificing warrior who’ll charge blindly into battle without a thought for his own safety!

Mystical Personality… the BEAR, symbolizing an imposing mass of sheer brawn and muscle!

Power of Strength: “Three suns aligned, pour forth thy light; and fill the archer’s bow with might!” 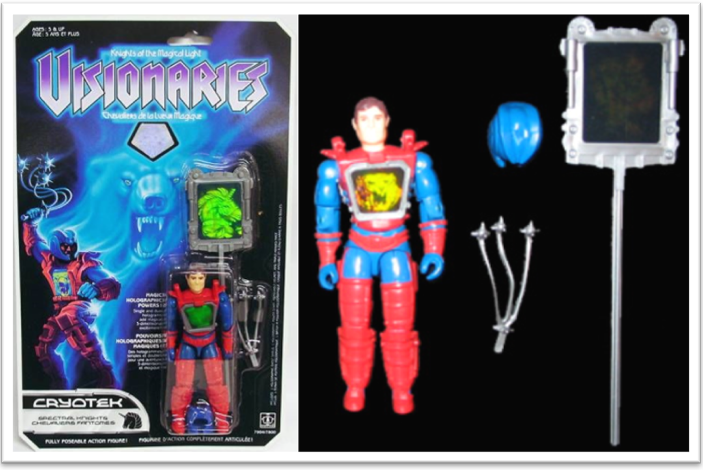 Leoric… a brave and regal Spectral Knight, chosen to rebuild the medieval-like society of New Valarak!

Power of Wisdom: “Whispered secrets of a shattered age, I summon you; renew this sage!” 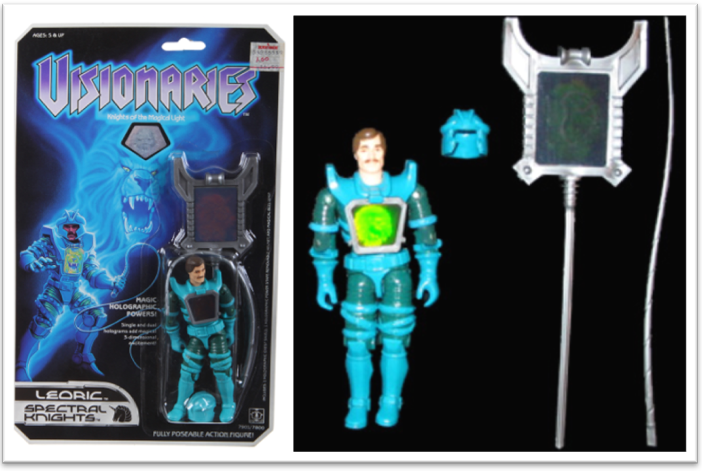 Witterquick… a valiant champion of justice with an over-anxious zeal to defeat the Darkling Lords!

Magical Totem… Calling upon his power of LIGHT SPEED, Witterquick dodges enemy bombardment faster than lightning through the sky!

Power of Light Speed: “Sheathe these feet in the driving gale; make swift these legs, over land I sail!” 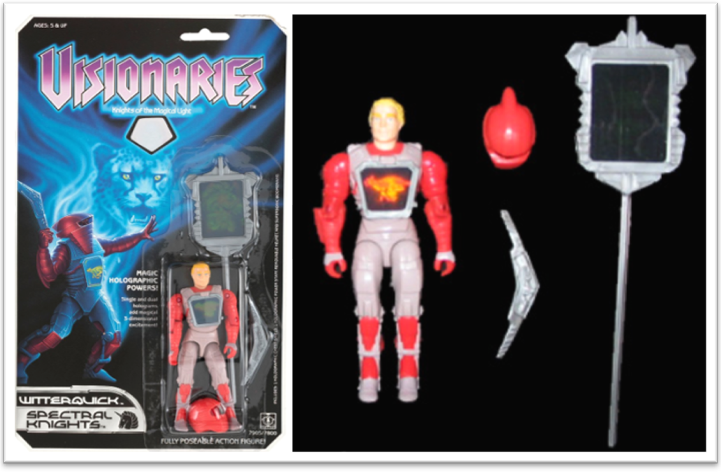 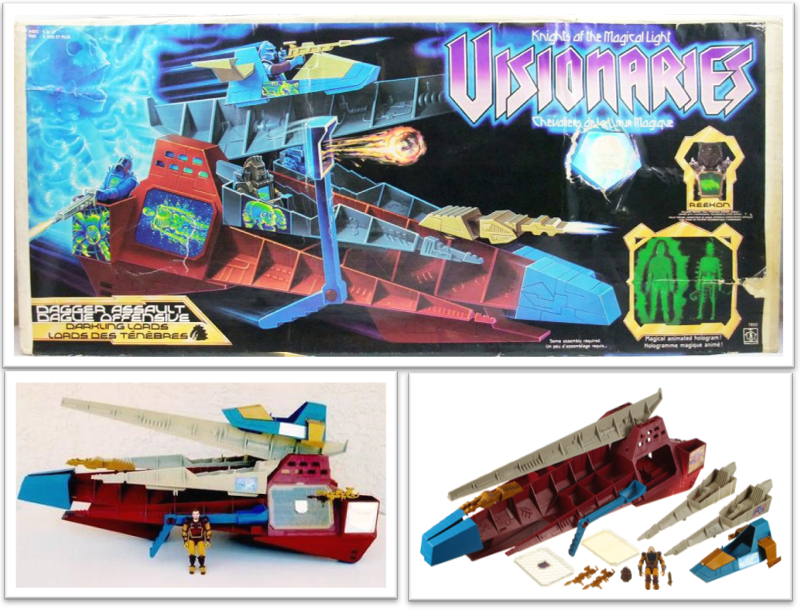 Reekon… a treacherous lord that will do anything to eliminate the Spectral Knights. So full of guile is he, that Merklyn gave him the ultimate command of Dagger Assault, the most awesome and powerful battle craft in the darkling Lord armada!

Mystical Personality… represented by a LIZARD, this evil lord can slither in and out of Spectral Knight defenses, coldly creeping into heavily secured areas!

Vehicle Power… Dagger Assault has a dungeon that siphons the magical powers from the captured Spectral Knights leaving them powerless!

Power of Magic Extraction: “Flay the flesh, lay bare the bone; upon this field let grief be sown!” 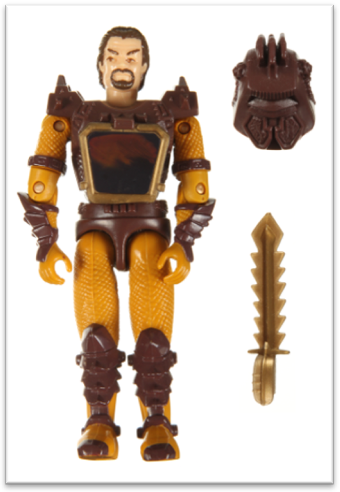 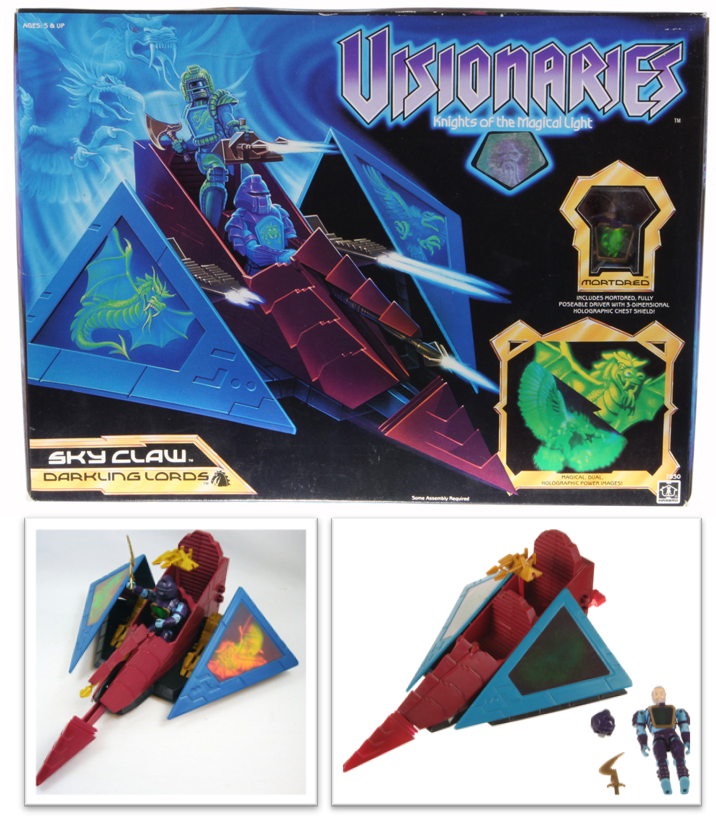 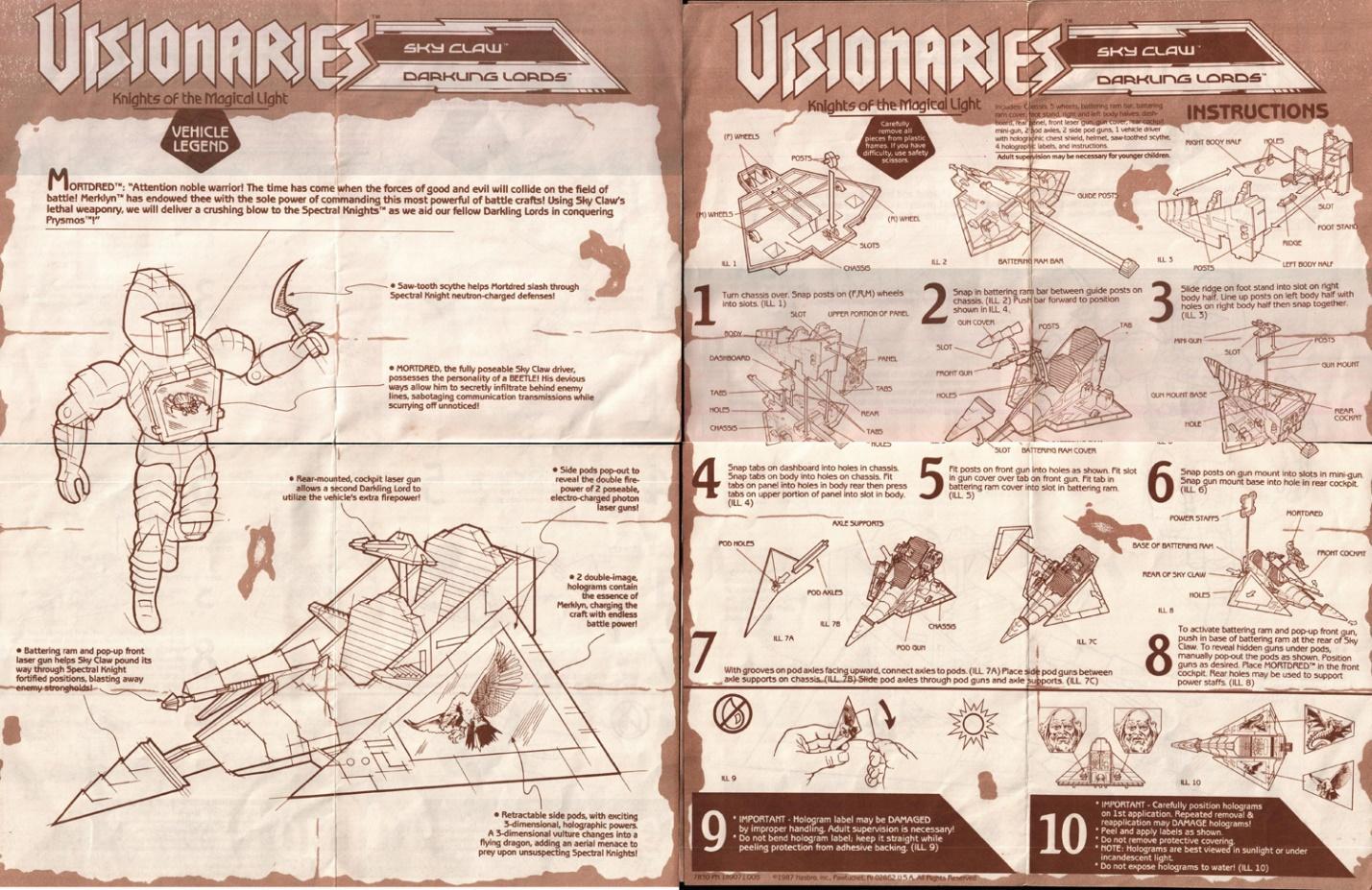 Mortdred… this cynical villain specializes in mayhem and sabotage. He is the only lord able to control the awesome and elusive Sky Claw as it deceptively invades the Spectral Knights territory!

Mystical Personality… represented by scurrying and deceiving BEETLE, this allows him to trick his adversaries into letting him infiltrate base camps, secretly sabotaging anything he can touch!

Power of FLIGHT: “Wings of steel shall ride the breeze. Invade the air, the land, the seas!” 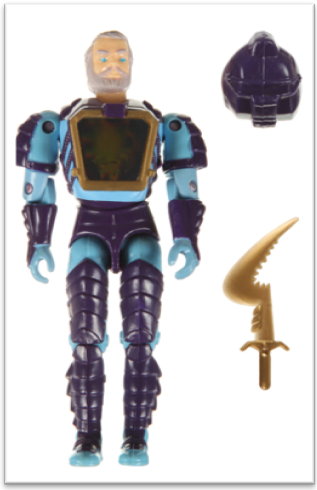 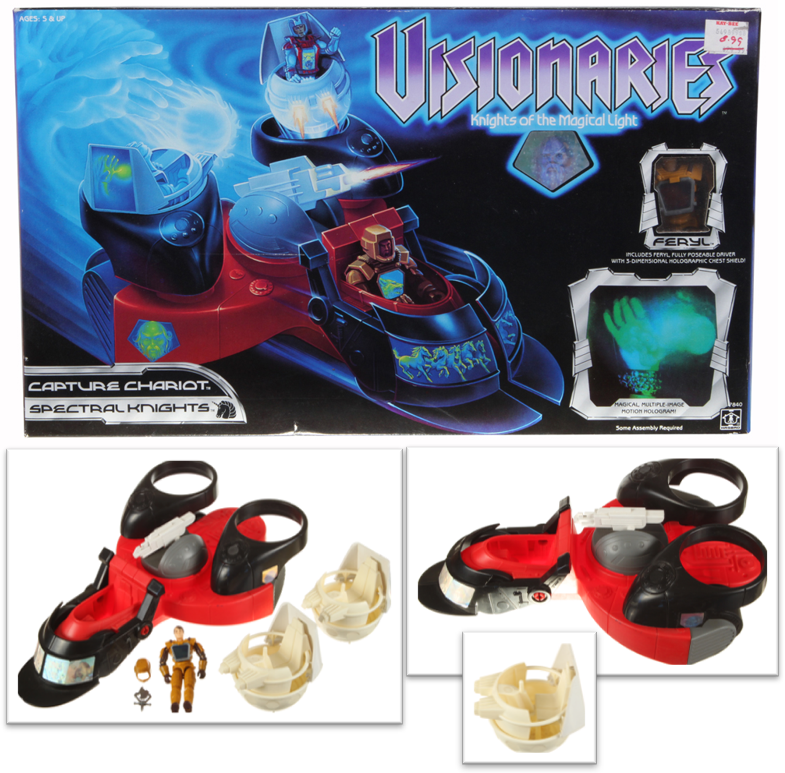 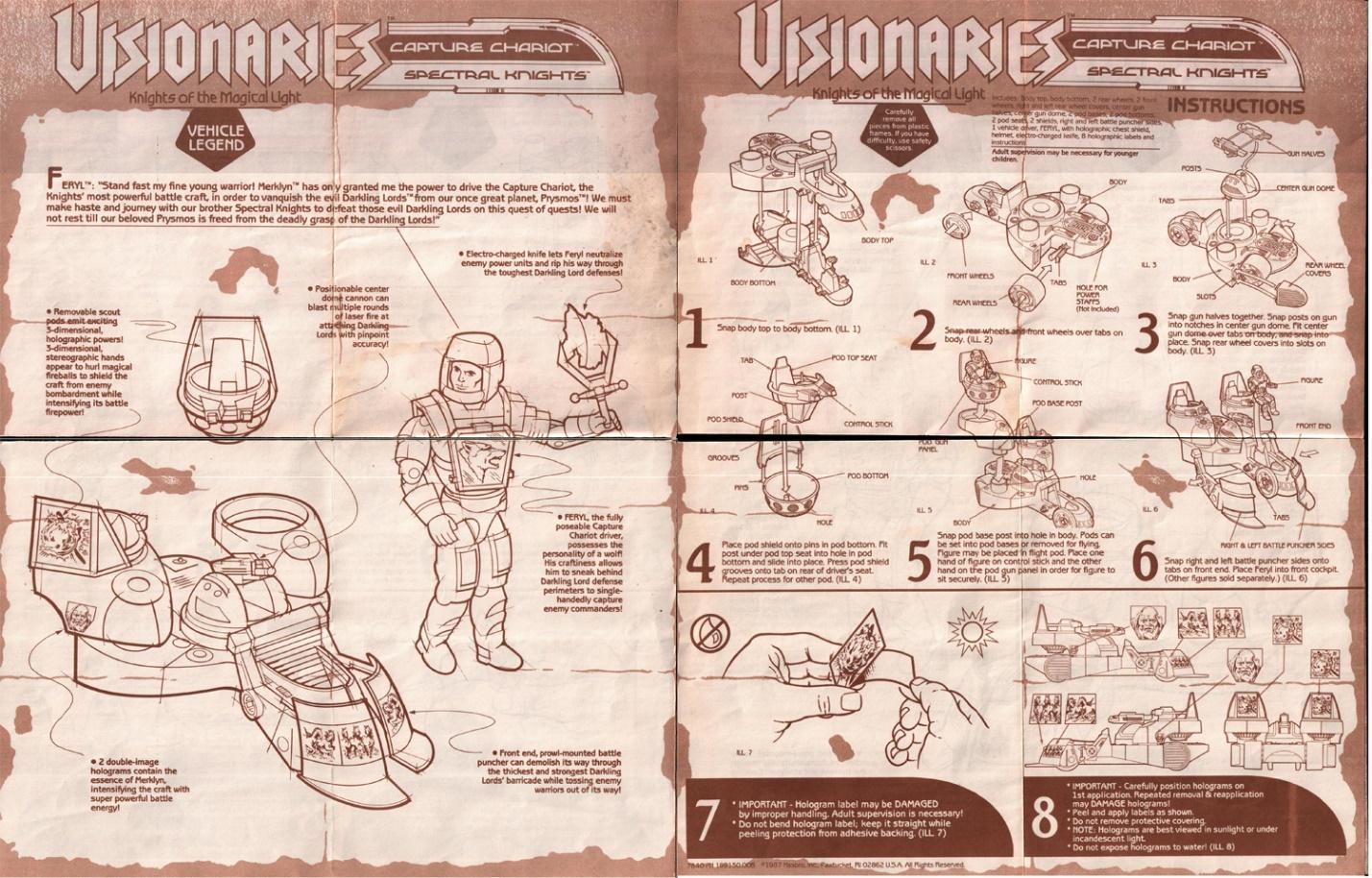 Feryl… a shifty knight with great battle experience and smooth tactical finesse! Only he has the ability and the power to drive the awesome Capture Chariot into strategic assault missions!

Mystical Personality… symbolized by the WOLF, this enables Feryl to craftily advance into enemy outposts, attacking Darkling Lords while they sleep!

Power of FIRE: “Bring forth the searing breath of stars and scorch the sky with blazing scars!” 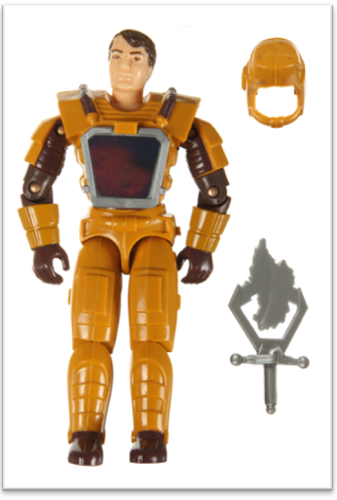 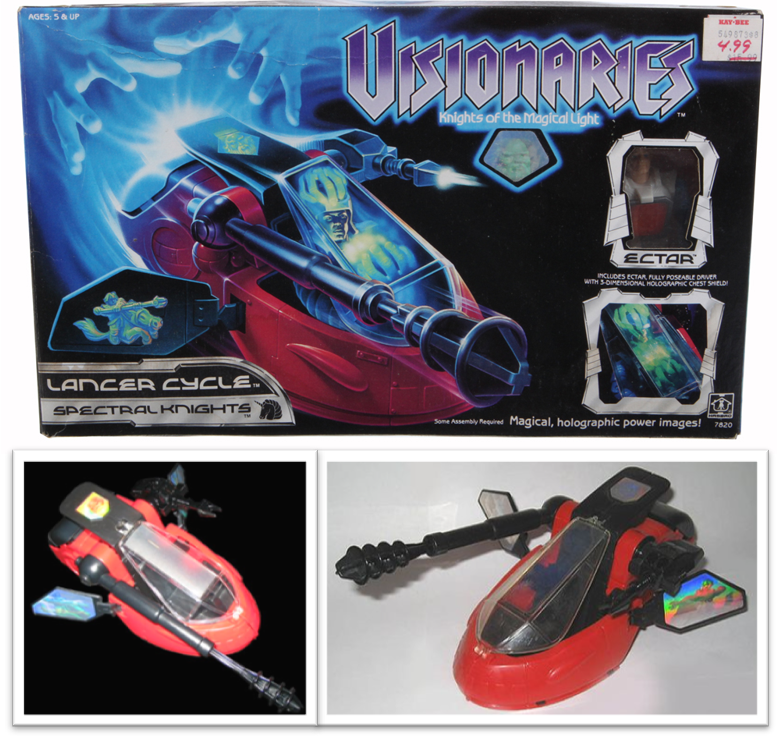 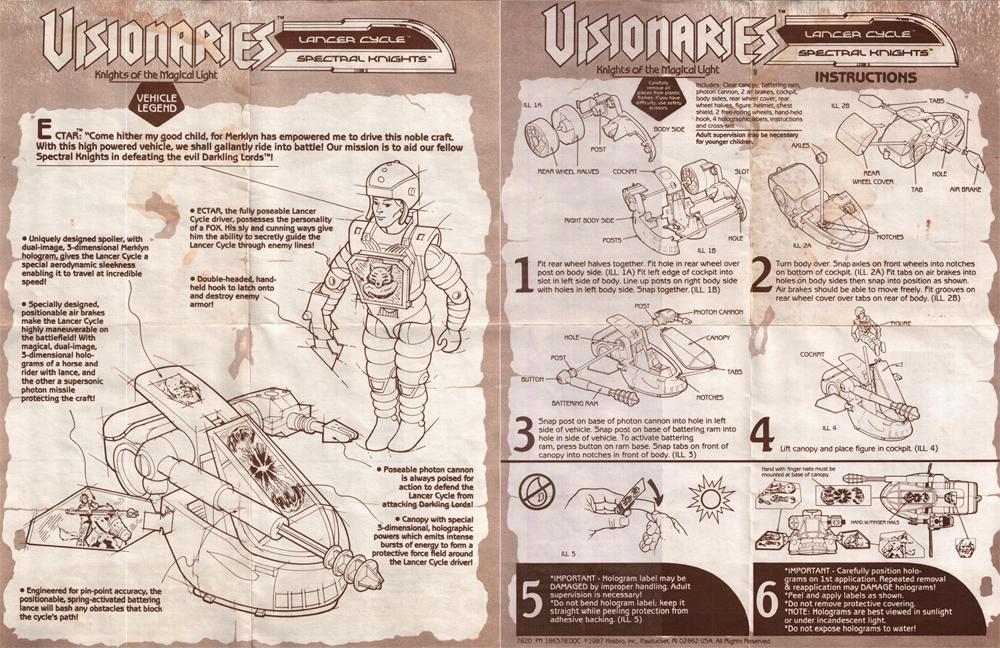 Ectar… a bold yet cunning young knight who is relentless in battle. The only member of the Spectral Knights able to drive the Lancer Cycle and propel it’s magical powers to full force!

Mystical Personality… represented by the sly and swift moving FOX, Ectar can outsmart any Darkling Lord anywhere at anytime!

Power of PROTECTION: “Shield this craft from one and all. Reflect, deflect, depose and fall!” 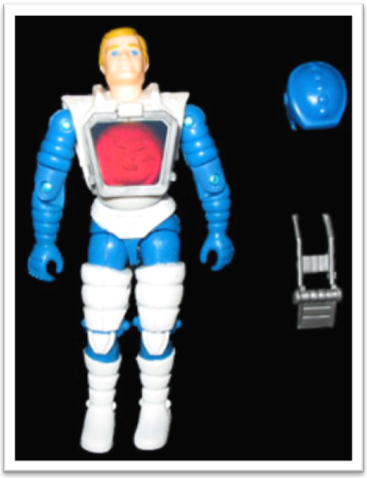 And with that we have the entire wave of Visionaries: Knights of the Magical Light.  Only one wave, but it was a good one. I wonder, if the line was able to continue, would the second wave of figures would have featured the female characters Galadria and Virulina? 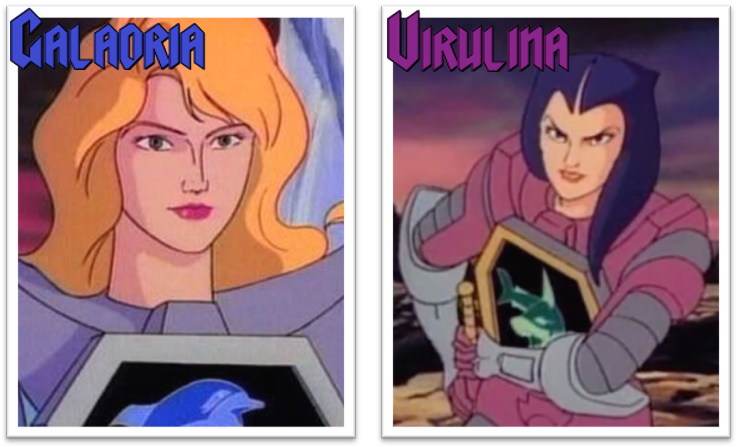 Who knows if we will see Visionaries again? Fans can only hope. The property isn’t without life. They had a recent crossover comic with The Transformers from IDW in 2018. 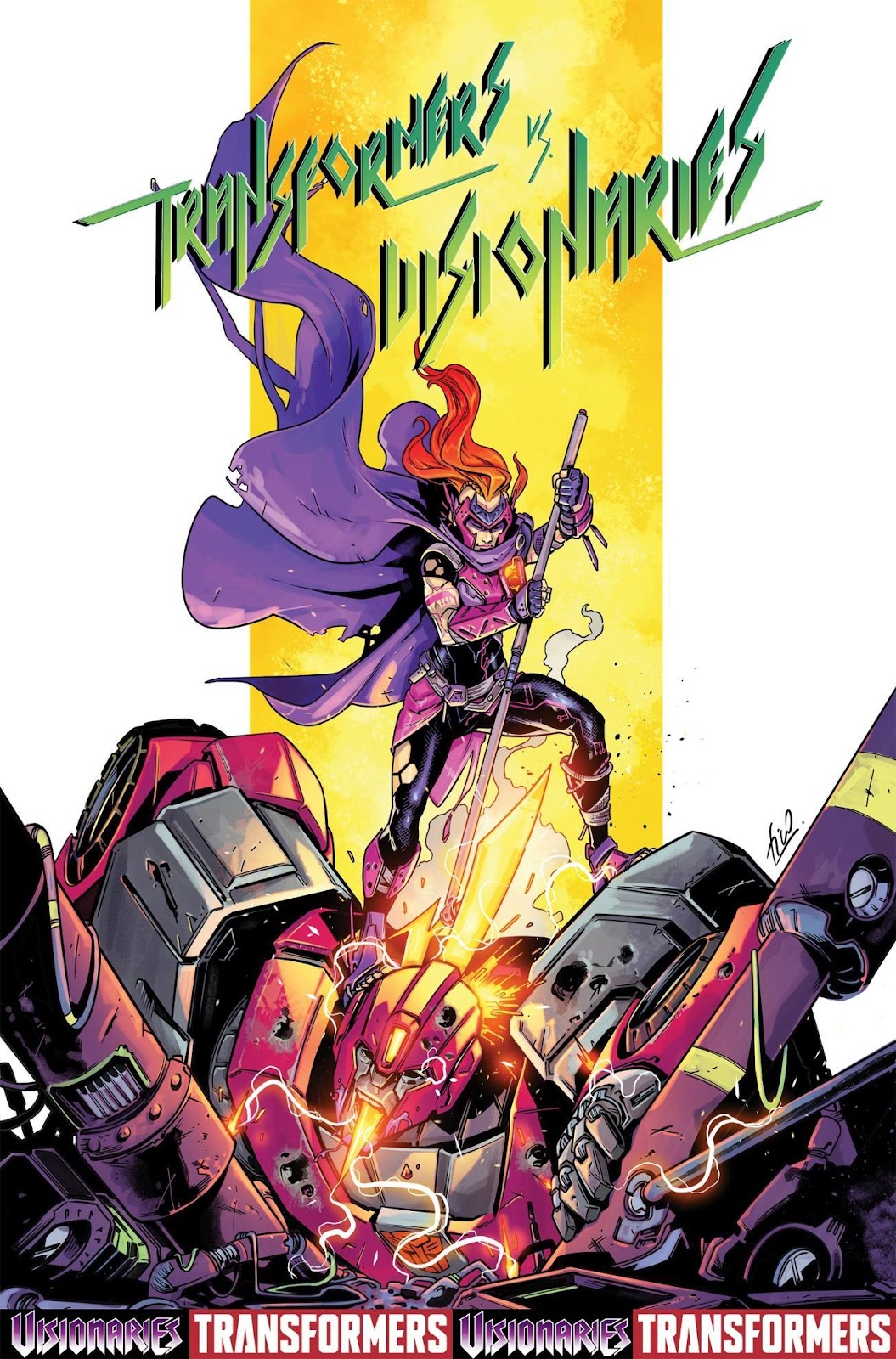 And back in December 2015, it was announced that Hasbro and Paramount Pictures were planning to create a shared cinematic universe (similar to the MCU) possibly combining Visionaries with the G.I. Joe, Micronauts, M.A.S.K. and Rom properties. 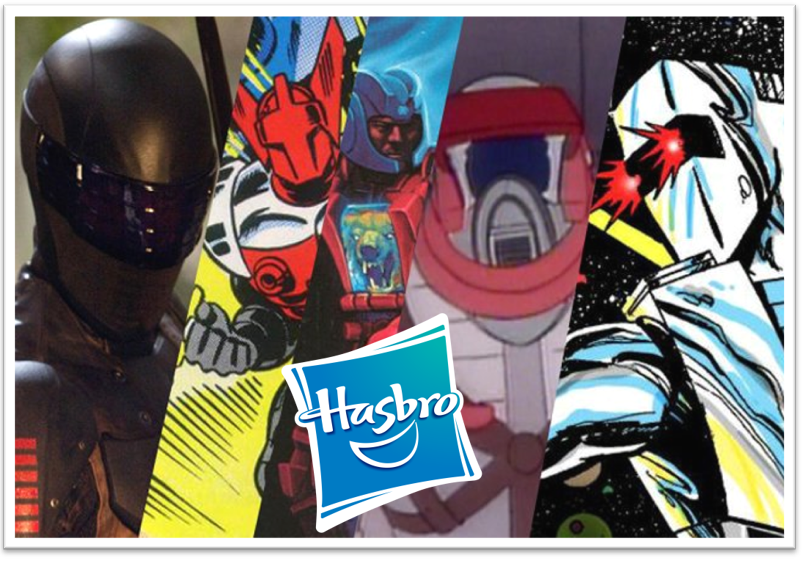 Over the years a number of writers took a crack at it, including Michael Chabon, Brian K. Vaughan, and John Francis Daley. However, the most recent news from 2018 had Joe Robert Cole, co-writer on Black Panther, taking a stab at it. No real updates since, so who knows if we’ll ever be treated to further adventures on the planet of Prysmos. But we can dream… 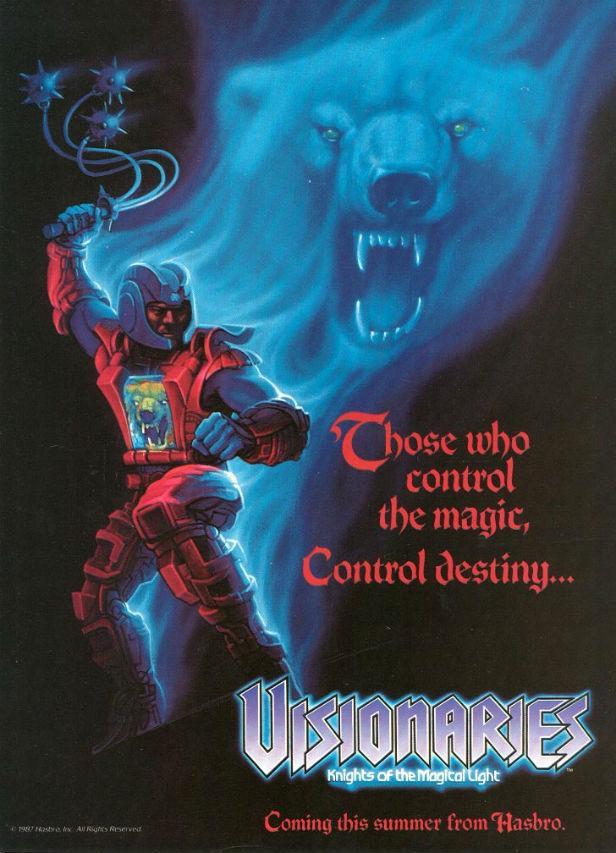