by Peter R
in Catch A Wave: Transformers
8 min read

Welcome back to the next installment of Catch A Wave: Transformers. Let’s get into it.

Finally winding down our run in 1985, let’s finish up with Miscellaneous figures. Ben C already gave us the Dinobots, so we only have a few uncategorized figures left. Let’s get into it. 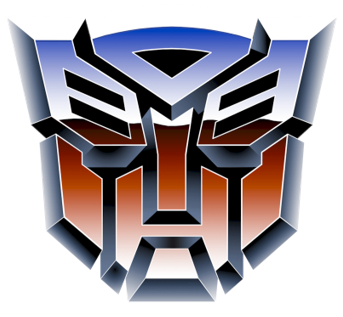 All we have remaining are 3 Autobots and one Decepticon that don’t neatly fit into any sub-category. These are more deluxe type figures in that they have either special features, extras, or are oversized compared to the regular run of Transformers in the 1985 series.

Even as a group of Miscellaneous Transformers I can’t really pull them together with one consistent intro or summary. So, I will do them as 4 individual one-offs. 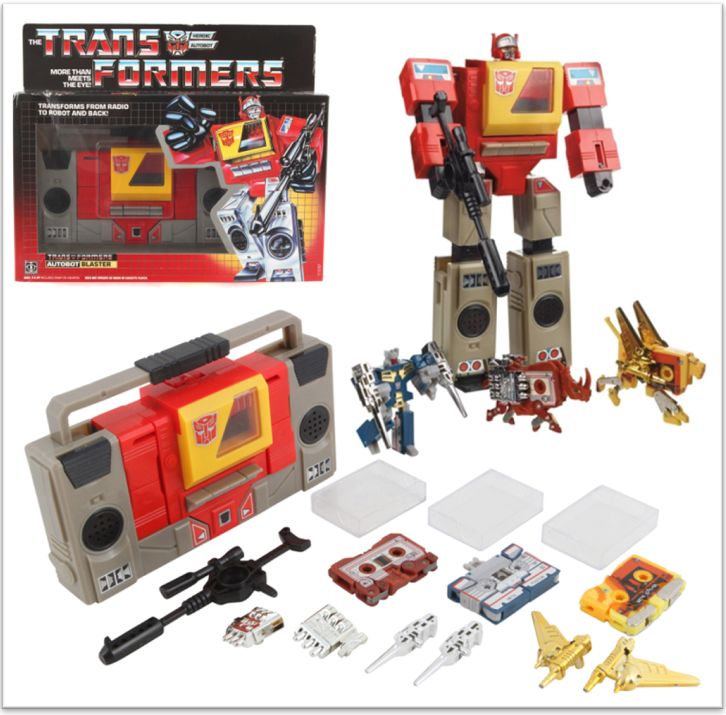 Now Blaster was the Autobot version of Soundwave. Instead of being a small tape deck, Blaster was more of a Boom Box that would have been more in line with what Radio Raheem would be strutting down the block with it pumping out Public Enemy. 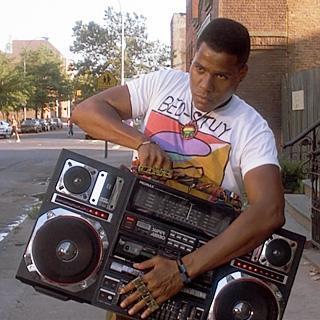 Same basic premise as Soundwave in that extra mini cassette figures could be included and interchanged. He featured spring-loaded buttons that make him feel more like a real radio. For instance: when his “start” button was pressed it would remain depressed until his “stop” button was pressed. And pressing the “eject” button popped open his tape door, where you could store a Mini-Cassette Transformer.

As with many early innovations, these buttons seem to stop working after a time. Not sure if it was just due to wear or some design flaw that caused the buttons to stop working. And one other negative with Blaster was that he was very blocky looking and had limited articulation. He straight up still looks like a box with a head in his robot form.

Like many Transformers of the time, Blaster was originally designed for another Japanese toy line and redecorated for release to US consumers under the Transformers umbrella. This design was originally used in Takara’s Microman: Microchange line. He was released for that line 1984 as MC-21 Radio-Cassette Robo, in two colors schemes and featured a working AM radio. 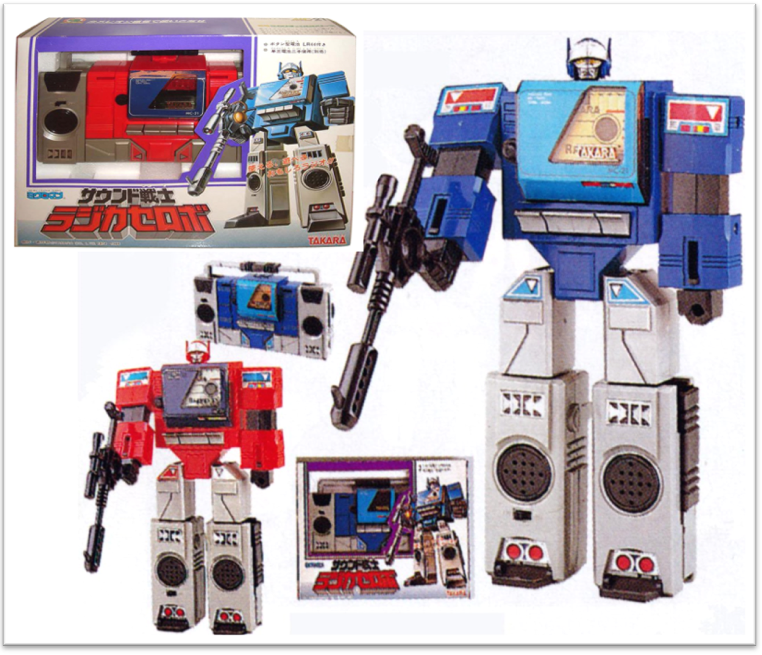 And while I included some of the cassettes in the image above, the Autobot Cassettes weren’t released with Blaster. Those didn’t come until the following year so we will get back to those little guys once we get to the 1986 collection. 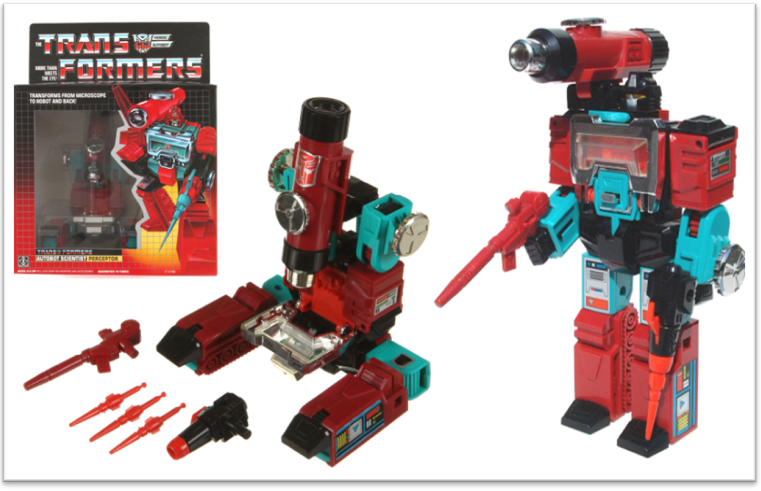 Another figure that doesn’t neatly slide into any category is Perceptor. An interesting addition to the Transformer mythos in that he was a semi functional Microscope. I say semi, in that it worked in enlarging whatever you were looking at, but it was by no means a reliable scientific tool.

This was a more complicated design than many other Transformers of the time. He even had a working knob that allowed you to adjust the scope. Definitely more intricate that the simple box that was Blaster.

That said, this was another retooled Japanese release from Takara. This was originally designed by Hideaki Yoke and released in 1984 in Takara’s Microchange: Microchange line as MC 20 Microscope Robo Micro Scope. But after a recolor redesign, he was quickly repurposed for Transformers. 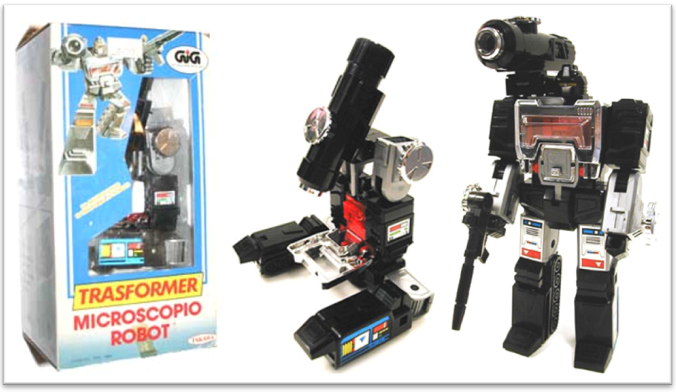 Our final Autobot was a big ‘un. I remember I got this big guy from “Santa” when I must’ve been 8 years old. Look at the pure excitement on my face. I joke but I wasn’t a big smiler for pictures as a kid. Transformers were serious business I was psyched to get this one. 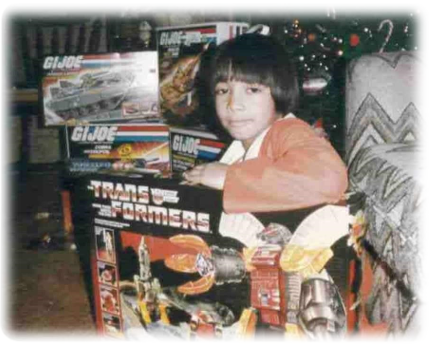 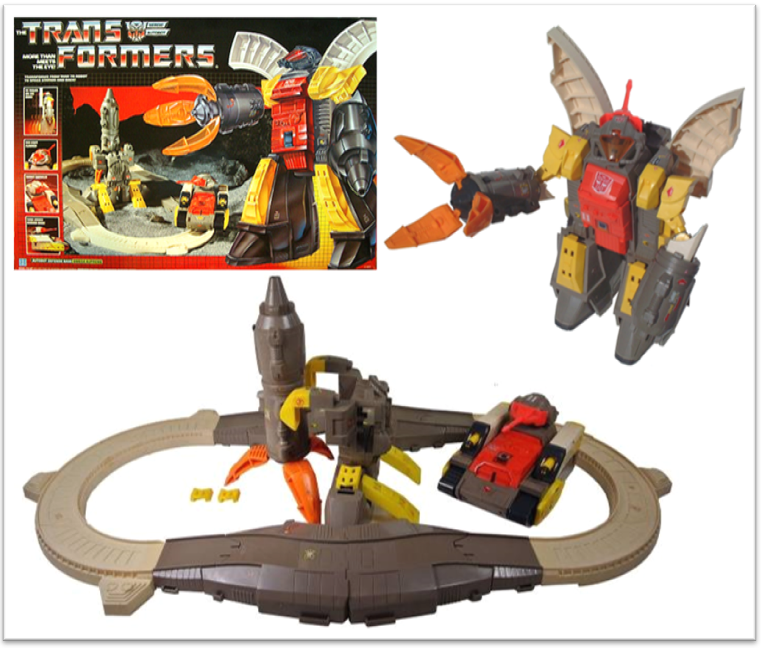 Omega Supreme was the first really impressively sized Transformer that I recall as a kid. This thing seemed huge to me. Sure, when you break it down, it is complicated and simple at the same time. It was a motorized working tank, but it only really looped around what is essentially a small circle track. And to Transform him, you needed either an engineering degree or were a Lego Master Builder as it required track parts, accessories, and tons of patience. 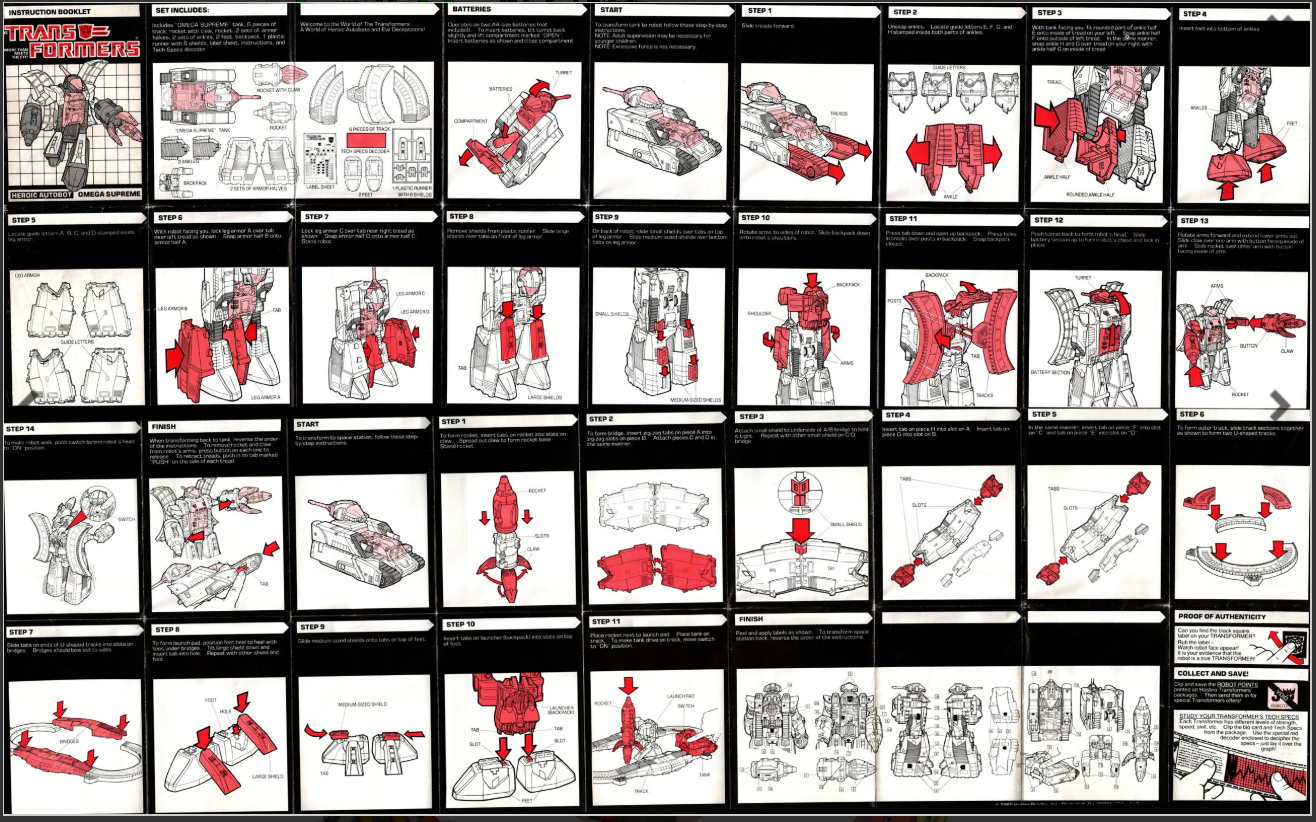 But again, once transformed into robot form he was an impressive figure that dwarfed most other figures of the time. Below are some pics that give a sense of how much larger he really was. 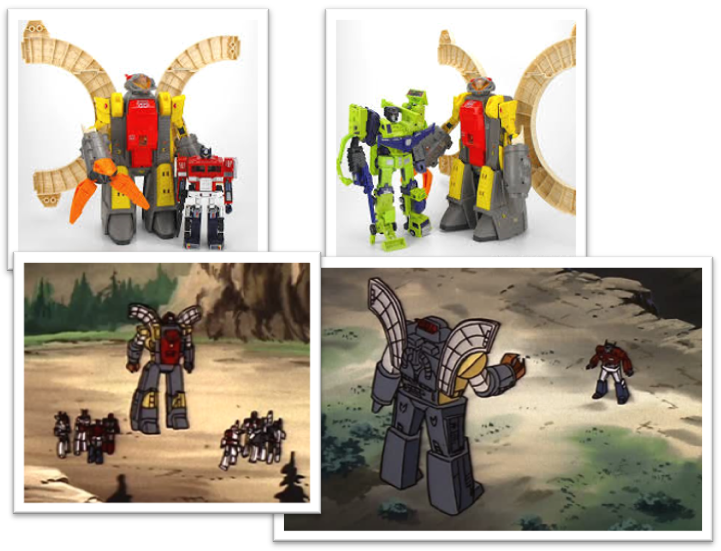 It was rare for a Transformer to really match the scale they were presented on the show. I mean Devastator was actually 6 figures in one so it made sense the combined form was larger than the rest. But there is a noticeable size difference between Omega Supreme and Optimus Prime.

Now given the success of the Transformer line in year 2, Hasbro had to expand their licensing beyond Takara’s defunct toy lines, so with Omega Supreme they sourced an obscure company by the name of ToyBox. Originally sold as Mechabot-1 by ToyBox sometime in the early ‘80s, I can’t find a lot of information as there were apparently other knock offs and reissues that muddy the origins of the design.

But this is yet another example of a repurposed older design that was simply added to the narrative of the growing mythos of the Transformers.

On that note, let’s finally turn our attention to the bad guys, and see our last Decepticon that is also without an easy classification. 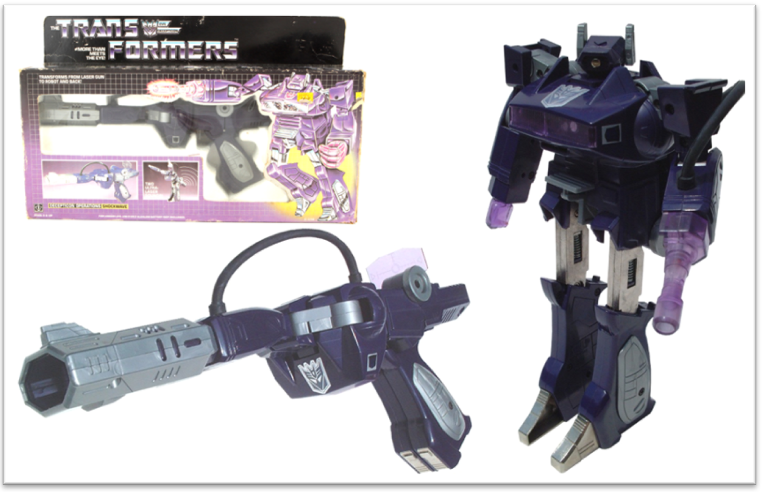 One of the most iconic Decepticons ever produced, Shockwave was an instant hit. With his working purple lights and sound, he was much more fun in gun form than Megatron. And even with the very simple design and transforming actions, he is also a stunning piece in robot form.

There’s just something about that cycloptic head mold that just resonates more than most other Transformers of the time. He is definitely one of the Top 5 Decepticons of all time and a popular image used on some of the best Transformer Comic covers over the years. 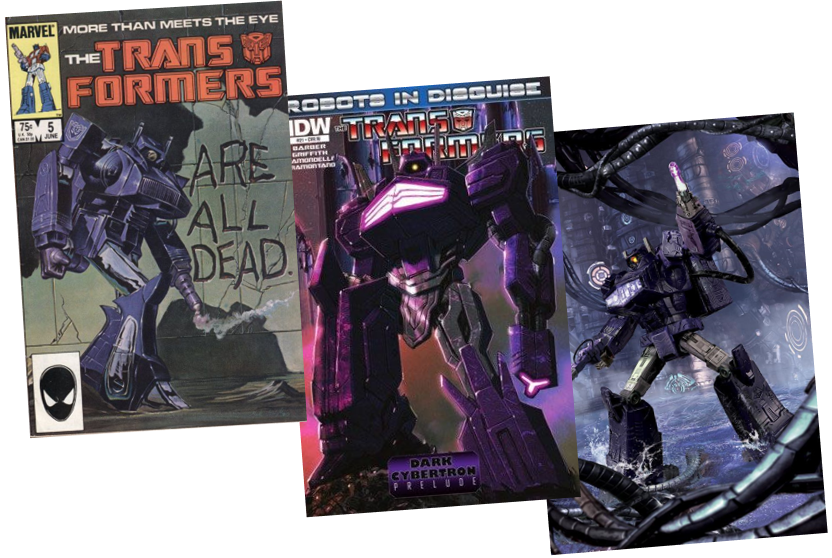 And continuing our theme this week of repurposed designs, Shockwave was yet another design that Hasbro licensed to fill out the booming toy line to meet consumer demand for new figures. And a jumbled history that seems to point towards Shockwave being first designed by ToyCo as the 1983 4 Changeable Astro Magnum, sold only in Japan. 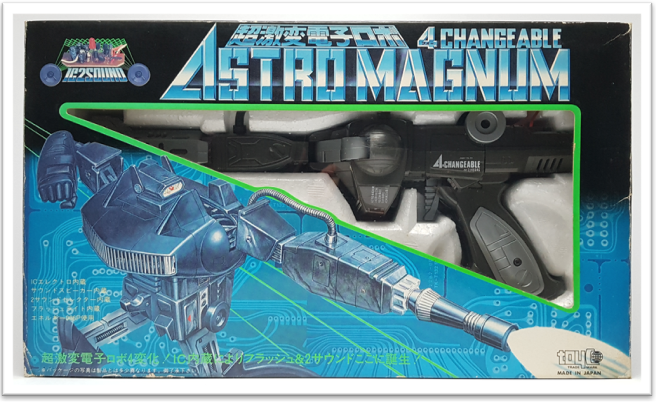 Once again, this design had many knock offs and a version that was licensed by Tandy and sold in the US as the Radio Shack exclusive Galactic Man, which more often goes by the nickname, “Shackwave”. 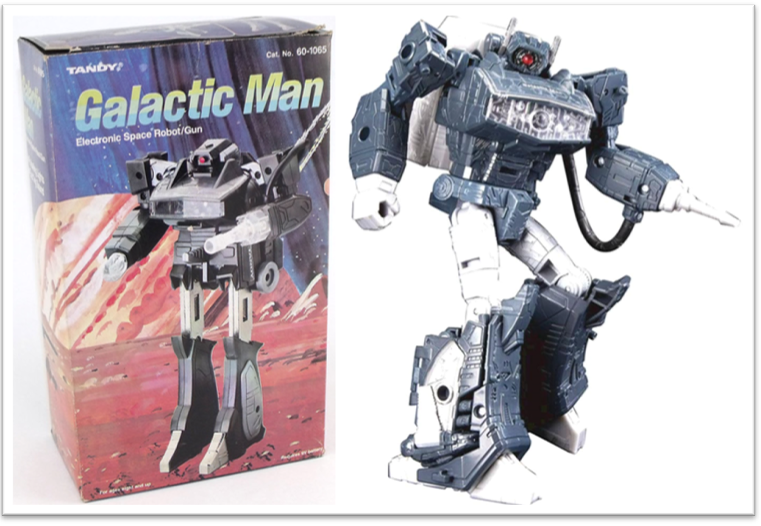 Well that’s it for Transformers G1: 1986. Hopefully you enjoyed this look at the random figures that Hasbro repurposed that didn’t fit into our previous groupings. So, I leave you again with a small commercial excerpt.

I find it amusing that the kids left behind the microscope for Webster’s dad, George Papadapolis. Don’t worry Alex Karras, no one else wants that one. Try as you might, a microscope just isn’t as cool as a motorized tank or light flashing gun.