Deprecated: get_option was called with an argument that is deprecated since version 5.5.0! The "blacklist_keys" option key has been renamed to "disallowed_keys". in /home/jameso29/public_html/toyinformer.com/wp-includes/functions.php on line 5057
 ISSUE #15: KENNER RETURN OF THE JEDI: PACK-IN FIGURES (1983-1984) | ToyInformer.com

Welcome back to the next installment of vintage Catch A Wave: Star Wars.

Well, here we are at the end of the pack in figures. Just one more set left to go, here. For “A New Hope,” we had 7 additional figures, 5 of which came from the Droid Factory Playset along with Blue Snaggletooth and the Dianoga. Then we had the Probot and Slave 1 Han in Carbonite from “Empire.” Now, we’ll cover the pack-ins from Jedi. Keep in mind there were no pack-ins for Power of the Force.

For ROTJ, we have the Max Rebo Band and Salacious Crumb. Never fear about Jabba and the Rancor. Those will be in the next set of articles under the “Beasts” Category (along with the Wampa, Taun Taiun and Dewback).

Let’s dive in for another short one, this week, shall we?… 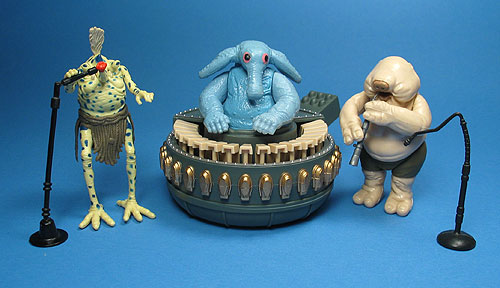 Poor Droopy McCool gets the shaft on the title of this 3-Pack, but these three figures are every bit full action figures. For some reason, though, they never get added into the final count of figures which seems silly. Three excellent figures from a detail perspective and the set comes with a bunch of pretty fragile and often-lost accessories. The accessories (save the organ) was molded in either black and gray plastics. Every known example shows that the Black Moulded Musical Instrument was exclusively packed with the Gray Moulded Microphone Stand and Music Stand, while the Gray Moulded Musical Instrument was exclusively packed with the Black Moulded Microphone Stand and Music Stand. The organ was produced with both bronze and gold spray operations. No examples exist that have all gray or all black accessories. They were always mixed, as above. 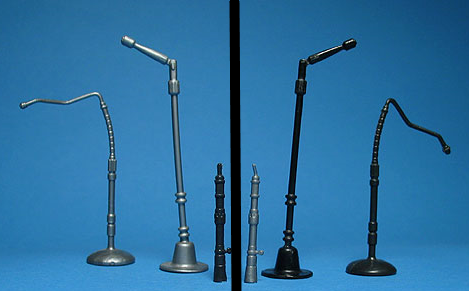 [The instruments shown in their proper groupings] 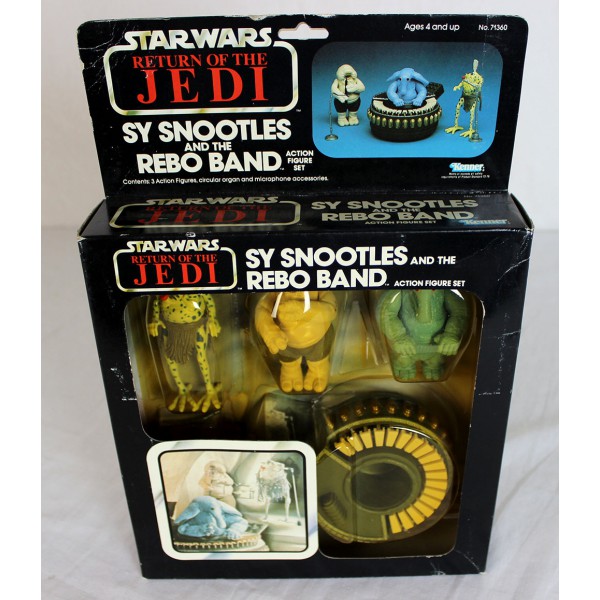 [Max Rebo Band shown packaged in its 65-back window box]

The figures themselves had the same articulation as the rest of the figure line and great detail. Note that Max’s limbs often fade to a lighter blue over time (even if still sealed). This set can be had in the package for $200-250 and loose with a complete set of accessories for about $100. Each individual figure will run about $25-$35 if they have their appropriate accessory. 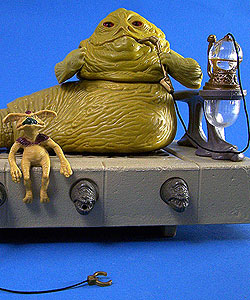 [Salacious Crumb shown with the Jabba the Hutt Playset]

Packed in with the Jabba the Hutt Playset (which we will cover in more detail in a few weeks), this little inaction figure is quite cool and very detailed considering he has no articulation. The little annoying muppet (since that’s essentially what he was) is a favorite among adults who remember Jedi fondly. I am among them. He came poly-bagged and can be easily found that way on the aftermarket as a large bunch of these showed up long after the line had died. Don’t expect to pay much. Even still sealed in a bag, this shouldn’t run more than $10 since he is so common.

And there we have the finale of the pack-in figures. Next week (and over the next few), we will discuss the beasts of the vintage line including Jabba, the Rancor, The Wampa, The Patrol Dewback and the Taun Taun. Until then, be well, thanks for reading, play hard, but play nice.